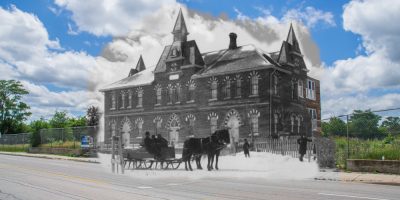 Way back in the early 19th century, schooling wasn’t a right, it was a privilege of the wealthy. It wasn’t until 1816 that Canada passed The Common Schools Act, giving communities the authority to build a school and hire a teacher, as long as at least 20 students could be guaranteed. However, it would still cost many families too much money to send their children and many kids were still left without an education.

Fast forward to 1854, with schooling finally a free guarantee for all citizens, Barrie built its first real common school and after only one year, it outgrew itself and another school would need to be built, with extensions to that building being made only one year after that!

After another school built in 1871 was filled to capacity after only four years (thanks in part to schooling becoming mandatory for ages 7 to 12), the city decided it would build two more, one in the East, and one just on the West edge of Downtown Barrie, which at the time was filled with residential housing before families moved into subdivisions and businesses would take over the downtown core.

While it began life as the West Ward School, it would later be renamed in 1920 to commemorate a visit by the Prince of Wales to Canada. It would also receive a pair of renovations in 1919 and 1949, and by 1987, Prince of Wales would be the oldest school in Simcoe County still operating under its original purpose.

Prince of Wales would continue to grow and evolve (including instituting a “no-homework” policy for the 2007-2008 school year, much to the delight of its students) before finally be closed in June 2011. Former students from the school would continue their education at Hillcrest Public School.

If you want to learn more about The West Ward School/Prince of Wales Public School and all of Barrie’s history, head over to the Barrie Historical Archives, Barrie’s online museum. It’s full of pictures, videos, audio, and documents spanning nearly 200 years and it’s completely free!