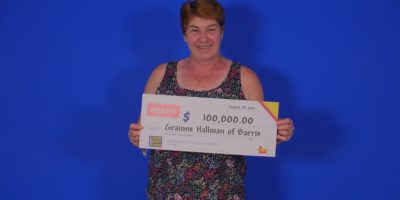 A Barrie woman has her sights set on a vacation after winning a hundred grand from the OLG.

Grainne Hallman won the top prize on an Instant Cleopatra ticket bought at a Petro Canada on Dunlop St. in Barrie, and says it was a purchase on a whim. “I had just dropped my husband off at work when I decided to stop at the store and buy a scratch ticket,” said Grainne as she picked up her prize at the OLG Prize Centre in Toronto. “At first I thought I had won $10, but after a closer look I saw it was actually $100,000,” said Grainne. “I checked the ticket on the OLG Lottery App and it said ‘Big Winner’, so I called my husband right away.”

After paying off some bills, the self-employed 57-year old says a vacation will be in order.