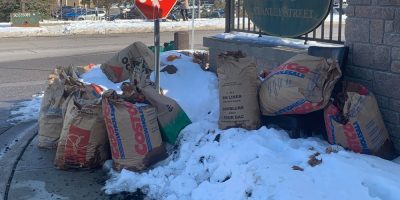 The City of Barrie says the pileup of yard waste bags at curbs around town has been collected.

And as of Monday, the city says yard waste collection is back to its regular schedule.

They noted to Barrie 360 that in addition to using city crews, a second contractor was hired to assist on Friday, November 25.

It continues to waive all fees for residents bringing yard waste to the landfill for the remainder of 2022.

Last week, the city said they were seeking financial penalties from the contractor over the nonfulfilment of its agreement with the city to collect the bags of yard waste.

During a media conference on Tuesday, November 22, Mayor Alex Nuttall said the contractor had been informed.

“The city is seeking financial penalties on behalf of the taxpayers in accordance with our contract due to non-fulfilment and negligence of contractual responsibilities,” said Nuttall.

“As we’ve heard from residents around the city, and we’ve also experienced ourselves, this is obviously negligence when it comes to a contractual obligation.”

The city has an agreement with Waste Connections and says the agreement provides remedies in the event of non-performance.

And so, the city says it’s exploring different remedies in accordance with the agreement.

Regular garbage and recycling collections were not impacted during the logjam of yard waste bags.

Yard waste is collected every other week in December on the week opposite your garbage collection.