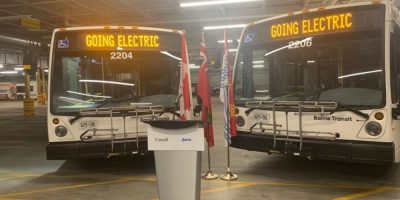 When the wheels on the bus go round and round in Barrie, at least two of the transit buses will be electric.

The federal government and the City of Barrie announced on Friday an electric bus pilot program with $3.3 million in joint funding.

“The money will allow Barrie to go to market and order both the buses and separate charging stations, then conduct a pilot project between two competing systems and determine what’s best for Barrie in terms of our transit fleet going forward and moving to electric,” says Nuttall.

The mayor says the City of Barrie is committed to reducing Barrie’s corporate emissions to net-zero by the year 2050.

“This investment from the federal government will help us move closer to that goal by enabling us to move quicker towards a greener transit system for our community,” explains Nuttall. “This is ensuring we are taking care of this beautiful environment that we’re so blessed to live in.”

The pilot project will be a learning curve, according to Brent Forsyth, director of transit and parking. He says there are a lot of intricacies with a new fleet, such as the operation and maintenance to safety and training.

He says it will also involve working with utility companies in terms of the draw from the network and working with emergency services in training and how to respond to a bus that is electric versus a diesel bus.

As for how often the buses will need to be charged, Forsyth says they do have some data from other municipalities that have electrified buses in service.

“Depending on the fleet, you could get 300 to 400 kilometres a day, and then it depends on capacity and weather, things like that,” he says.

For the pilot, the buses will be charged at the Welham Street garage.

The two electric buses are expected to be delivered to the City of Barrie by the end of 2023.