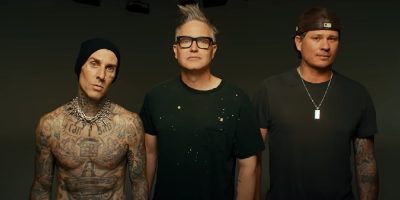 The trio is back together and will hit the road next year with a 70-date world tour.

The classic lineup returns with Tom DeLonge, Mark Hoppus, and Travis Barker reunited for the first time since 2015.

Their new single, ‘Edging,’ comes out on Friday, with the new album expected by the end of the year.

Showing their love for double entendre’s they released a video of fans explaining the countless ways they hoped the band would ‘come.’

It’s funny, juvenile, and exactly what we love about this band.

DeLonge left the band in 2015 to study UFO’S, and his spot was filled by Matt Skiba from ‘Alkaline Trio’

He was declared cancer free in September.

Tickets for the concerts go on sale Monday. Canadian dates are as follows