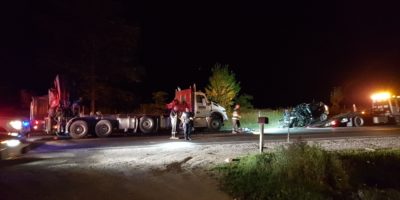 A 9-year-old boy was among the three killed in a head-on crash in Bradford.

South Simcoe Police Traffic Sgt. David Phillips confirms a head-on collision on Yonge St. Friday afternoon claimed the lives of three people; the young boy, a 37-year-old man, and a 61-year-old woman. “The three fatalities did come from the SUV.” said Sgt. Phillips. “The driver of the tractor-trailer was treated and released.”

The two adults were pronounced dead on scene, while the boy was rushed to hospital and later succumbed to his injuries.

The collision happened around 4:30 Friday afternoon, when a northbound SUV collided with a southbound transport truck on Yonge St. south of the 14th Line. Traffic Unit officers are investigating the cause of the collision and want to hear from witnesses who were on Yonge Street in the area at the time. Anyone with information is asked to call South Simcoe Police Service at 905-775-3311, 705-436-2141 or Crime Stoppers at 1-800-222-8477.