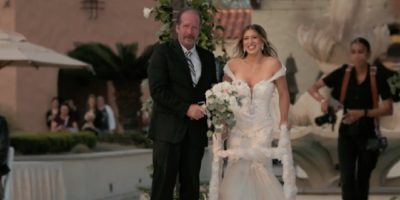 Chelsie Hill has used a wheelchair since she was a teenager, but dreamed of walking down the aisle one day at her wedding. So, she found a way to make it happen.

Hill, a passenger in a drunk driving accident as a high school senior, is paralyzed from the waist down. And she’s forged ahead — she founded an all-women wheelchair dance team, The Rollettes, which runs a women’s empowerment weekend in Los Angeles for women and children with disabilities

Hill also found love, and this year, she tied the knot with her fiance, Jay Bloomfield, at a hotel in Huntington Beach, California.

She originally told Bloomfield she was going to go down the aisle in her wheelchair. “He didn’t know me when I was walking, so for me, it wasn’t really part of our relationship,” Hill told CBS News. “I made it seem like I was going to roll down the aisle and roll back.”

That’s what Hill did during the wedding rehearsal – but she’d been working for months on a surprise for the big day. Hill had decided she would walk down the aisle on leg braces.

“I’ve stood up before with the leg braces, I’ve walked around with them, but nothing like with a long dress on and not being able to see my legs,” she said. “So, I had to practice for about six months with the leg braces in order to really know that I could stand there and walk with my eyes forward and not fully at the ground the whole time.”

Hill was terrified on her wedding day. It rained before the ceremony, so she was worried the carpet she had to walk down was wet and would feel different than she was used to. Nervous that the walk wouldn’t go as practiced, but determined to try, Hill decided to go through with it.

Her fiance “was turned around, facing away – everyone was facing away. And our officiant said, ‘Okay, you may turn around.’ And when he turned around, he dropped,” Hill said. “I remember looking at him and just being like, ‘I did it! I’m here!'”

Hill said it was very difficult and she almost gave up, but her encouraging groom at the end of the aisle helped her get through it. “I remember looking at him and he was like, ‘You got this.’ He gave me so much energy,” she said. “I felt like being up there with him, our souls were connected in a different way. I felt like it was everything I had always dreamed of since I was a little girl.”

She only had eyes for Bloomfield, so she didn’t know what was going on around her – until a wedding guest told her afterwards. “The entire hotel balconies were completely full with people standing there like [shocked],” she said. “So, I didn’t know that. When I was walking down the aisle, every one of our guests faded away and it was just Jay and I.”

Hill says, though, you can have a dream wedding hopes others know that no matter what your ability. “You don’t have to walk down the aisle in order to have a beautiful and meaningful wedding,” she said. “Walking, for some people, isn’t the world. And some people can’t walk at all, they won’t even have that option. And you’ll still have such a beautiful wedding, no matter what.”

She also hopes her wedding story shows people that “love is love.” “Love is not discriminatory against what you look like or how you talk,” she said. “And I just hope people look at it and go, ‘Wow, if she can do it, I can do it.'”