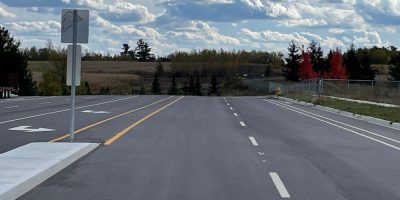 Barrie City Council is expected tonight to okay the purchase of land from Barrie-Bryne Developments (SmartCentres) to allow the extension of Bryne Drive from Caplan Avenue in the south to Harvie Road in the north.

It’s a critical piece of the puzzle. Without it, the city cannot begin to clear the brush for the connection.

Still, it could be some time before the work begins, “Now the question is, how quickly can we design and build it? And there has been some design work done… At the moment, because of fiscal constraints, it’s pushed about three, four years out. And I would like to see us try and do that sooner.”

The extension is part of the Harvie Road bridge project over Highway 400, designed to take some of the traffic pressure off of Mapleview Drive.

The bridge opened in June, and while there are no hard numbers in terms of traffic volume, Lehman says it is being used regularly by many drivers. In fact, he says he’s a regular user.

An ongoing issue on the bridge is speed, “because it goes through a pretty unpopulated area just for a little bit on the approach… we have had some issues with, you got to remember, you’re still on a city street. It’s 50 (kph). It’s not, it’s not 90.”