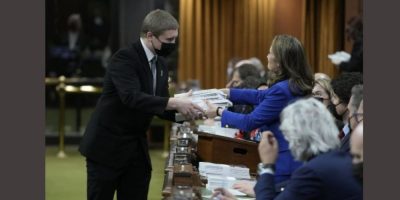 The federal Liberal government responded Thursday to months of pressure from the NATO military alliance and others by promising more than $8 billion in new military spending over the next five years.

Yet the injection of new funds contained in the federal budget appeared largely symbolic as the government struggled to say what the money, most of which won’t materialize for years, would actually buy.

Officials also acknowledged that even with the additional money, Canada will remain far short of NATO’s spending target, even as other allies dramatically ramp up their own military investments following Russia’s invasion of Ukraine.

Finance Minister Chrystia Freeland made only a passing reference to the new investments and the need to strengthen Canada’s “hard power” as she presented the Liberals’ latest budget in the House of Commons.

“We know that freedom does not come for free, and that peace is guaranteed only by our readiness to fight for it,” Freeland said in her budget speech, according to prepared remarks.

“That is why we are making an immediate, additional investment in our Armed Forces, and propose a swift defence policy review to equip Canada for a world that has become more dangerous.”

The budget proposes $8.5 billion in additional military spending on a cash basis spread over five years. In real terms, that means between $800 million and $3 billion in new funds for the Defence Department and Canadian Armed Forces each year.

That new money is on top of previous spending increases contained in the Liberals’ 2017 defence policy.

The budget specifically earmarks around $250 million for culture change efforts, and another $450 million to extend the military’s support mission to Ukraine and a long-standing anti-terrorism operation off the coast of Africa and the Middle East.

But it is noticeably vague on what the government plans to do with the vast majority of the remaining funds, including how much will be used to modernize North America’s defences with the United States.

Defence Minister Anita Anand promised this week a “robust package of investments” for updating the North American Aerospace Defence Command in the coming months, raising expectations of a major announcement in the budget.

The budget plan does say the government is “currently considering options” to upgrade Norad, including looking at new surveillance, intelligence, command and control capabilities, as well as new capabilities to “deter and defeat threats.”

Military officials and experts have warned for years about the state of Norad, parts of which are now obsolete as Russia and other adversaries have developed more advanced weapons.

The budget does include more than $875 million for the Communications Security Establishment to help the cyber spy agency defend and protect Canadian assets online. That includes boosting its ability to launch attacks.

But a senior Finance official speaking on background during a technical briefing suggested decisions on how the new money for the military will be spent will come at a later time, likely after the defence policy review.

Freeland directly attributed the decision to spend more on defence to Russia’s invasion of Ukraine while defending the lack of details, saying the government needs to do its due diligence first.

“We will very quickly have a study of our military expenditures, of Canada’s needs today,” she told reporters in French. “A study that must focus on the effectiveness of spending and create a plan that we can actually implement.”

The budget document also didn’t say how the addition of new funds will affect defence spending as a share of Canada’s gross domestic product, though the senior Finance official said Canada will eventually hit the 1.5 per cent mark in five years.

That is unlikely to satisfy Canada’s allies in the NATO military alliance, which has been pressing members to dedicate two per cent of their GDP on defence in the wake of Russia’s invasion of Ukraine.

Canada is estimated to have spent only 1.36 per cent of its GDP on the military last year, with only four other NATO members having spent less: Belgium, Luxembourg, Slovenia and Spain.

All NATO members agreed to the two per cent target in 2014 and reaffirmed it during a special leaders’ summit in Brussels last month, with promises they would present plans for meeting that target when they meet again in Portugal in June.

Defence analyst David Perry of the Canadian Global Affairs Institute said the new money announced on Thursday falls short of the expectations the government had set in the weeks leading up to the budget’s release.

Even with the new money, he said, Canada is in danger of falling behind virtually all of its allies in terms of spending as a share of GDP based on their public commitments.

And while some have questioned whether the military could spend new money given long delays in procuring equipment, Perry said there are large, pre-existing shortfalls in areas like maintenance and infrastructure.

The Conservatives had been demanding the government dramatically ramp up military spending, and interim leader Candice Bergen said her party was happy the budget included additional funds for the Armed Forces.

“Our Armed Forces, who do important work for us, should have the equipment to do that,” he told reporters.

“And there’s been clear gaps identified where our Armed Forces do not have the equipment to do the work they need to do. So (a funding increase) is something understandable.”

Singh did lament only minimal increases in foreign aid and development.

Banner image: Finance Minister Chrystia Freeland handles a copy of the federal budget in the House of Commons in Ottawa, Thursday, April 7, 2022. THE CANADIAN PRESS/Adrian Wyld