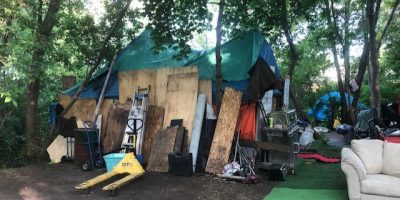 By-law officers have continued to respond to complaints from residents about people camping at Milligan’s Pond, several months after the City of Barrie enforced an emergency order and removed individuals from the municipal park on June 18.

A staff report presented to City Council last month listed 10 other occasions since the June eviction when by-law enforcement responded to the park because of public complaints about new camp sites and debris, smoking and drinking in the park, and at least one incident of active fires.

By-law enforcement may be aware of camping occurring from their routine patrols of municipal parks, but it’s been practice to not engage in interactions with the individuals unless a specific complaint is received.

“Since April 2016, where a complaint is received about camping, municipal law enforcement reaches out to the David Busby Centre to advise of the complaint,” explains McAlpine. “Enforcement services then attends the site to educate the individuals about the prohibitions in the city’s by-laws, and issues a notice to remove the tents or anything associated with sleeping or camping on the property.”

In late May, by-law officers responded to complaints from the public about an alleged camping site at Milligan’s Pond. Officers found many people on site, as well as 9 to 10 tents, large amounts of debris, fires, smoking on city property and discarded needles.

There was a three week delay in acting on the eviction notice as the city worked with outreach and emergency services to allow for a coordinated response due to the additional challenges of the pandemic.

A report to city council on October 26 revealed the city had spent over $15,000 to remove more than 19,000 pounds of debris from the park between the eviction of campers on June 18 and on three other occasions through October 9. The debris included needles, furniture, skids, heavy lumber and recliners.

“The reason we reach out to the Busby Centre is to ensure they are aware that there are individuals who may be in need of shelter, and if it’s feasible, for that shelter to be arranged for them.” says McApline.

It’s not always the same people pitching a tent at Milligan’s Pond. McApline says the population is transient. By-law officers are sometimes dealing with new people who are arriving.

At the time of the emergency order, the County of Simcoe had been paying to house individuals at local motels because of COVID-19, and the County offered to fund additional hotel rooms and staffing costs for the shelters, if required.

Before the eviction notice was acted on, the city wanted outreach organizations to find out why individuals were “living rough” and what the individuals would be seeking in terms of housing.

The report to city council explained there were several reasons why individuals chose to camp in the park.

Before the evictions, the County continued to provide opportunities for funding assistance for individuals related to first and last month’s rent, and two short term rooming house options, each with a number of units, were made available through Empower Simcoe, though no applications were received for the units in the days leading up to the removal of the campers.

McAlpine says based on conversations with the outreach organizations, some people did move into housing, either in a motel setting, or they found another location, and others went to the community where they had a social support system.

Throughout the numerous interactions related to camping at Milligan’s Pond, many warnings and notices were issue, but by-law officers laid only two charges.

In the report, staff said these situations are challenging as neighbouring residents and complainants are expecting the city to enforce its by-laws, while the campers may have limited, or no other options.

“It’s not like there’s something short term or in a couple of weeks that can resolve these issues.” says McApline. ” I thought there was great work done by the various organizations, and certainly the county to provide support for alternatives.”