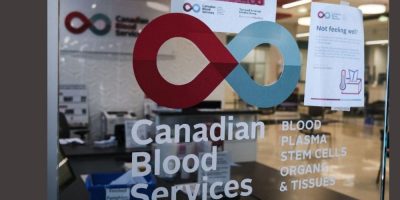 Canadian Blood Services says it is struggling to replenish a critically low national supply caused by the COVID-19 pandemic.

The organization says the virus that has persisted since March 2020 has resulted in the smallest donor base in a decade.

“The number of people across Canada who donate regularly has decreased by 31,000 donors since the start of the pandemic, which has put a strain on the existing donor community,” said Rick Prinzen, chief supply chain officer and vice-president of donor relations for Canadian Blood Services.

“Many of our regular donors already donate multiple times a year.”

The service oversees the inventory from which blood and blood products are regularly shifted around the country to meet hospital and patient needs.

But inventory has a shelf life — a year for frozen plasma, 42 days for red blood cells and five days for platelets — so it takes some work to ensure supply continues to meet demand.

Canadian Blood Services is hoping that National Blood Donor Week on now will help attract 100,000 new donors this year. But summer is a traditionally slow time for donations as people cancel appointments or go on vacation.

“Right now, we have compounded losses in donors due to COVID-19 and not having the ability to recruit new donors at in-person community events because of restrictions over the past two years,” Prinzen said.

The need for blood products tailed off dramatically as the pandemic brought travel to a near standstill and all but the most critical surgeries were cancelled.

At the same time, Canadian Blood Services wasn’t able to accommodate as many donors because of physical-distancing requirements at clinics, so the two balanced each other out.

But with things returning to normal, demand is increasing to pre-pandemic levels — even slightly above — because of a “catch-up in the health-care system” said CEO Dr. Graham Sher.

Blood supplies are adequate but a reliance on fewer donors coming in more often is not sustainable, Sher said.

“We are relying increasingly on a smaller number of donors and are relying on these people to come in at an increased rate,” he said.

“We need to be able to rely on a larger group of people with a lower frequency.”

The blood service has yet to see the effect of a decision earlier this year to end a restriction on men who have sex with men from donating blood products for three months, Sher said. The policy is to be effective no later than Sept. 30.

“Then we will have a donor program that is more inclusive than it is now and change the type of questions we will ask of donors.”

An increase in donations will help, but it’s hard to say by how much, he said.

“Evidence would suggest it will increase slightly as a number of new donors come in, (but) I wouldn’t want to rely on that as the mechanism by which we make up this shortfall,” Sher said. “I don’t think it will do that.”

Eric Polo, 15, from Toronto receives blood products every month for a rare condition that affects his body’s production of red blood cells.

“They keep me alive,” he said.

“I am thankful for what blood donors do.”

Banner image: A blood donor clinic pictured at a shopping mall in Calgary on Friday, March 27, 2020. THE CANADIAN PRESS/Jeff McIntosh

This report by The Canadian Press was first published June 13, 2022.