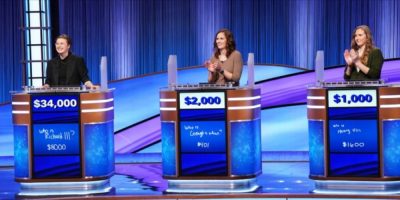 Canadian “Jeopardy!” champion Mattea Roach has found herself at the centre of an ownership dispute.

The 23-year-old Torontonian — or is that Haligonian? — tutor earned the eighth-longest streak in the TV game show’s regular-season history Friday with 14 consecutive wins, and her fellow Canadians are taking note.

“People in Nova Scotia, and then also people in Toronto — the two places that I associate myself most closely with — have been very eager to claim me as belonging more to one than the other,” said Roach, who spent the first six years of her life and some of her adolescence in Halifax.

“They don’t want to just claim that you’re from Canada if you’re from a specific city or specific province. It’s like, ‘No, she’s not just from Canada. She’s from Nova Scotia, or she’s in Toronto.'”

In reality, she belongs to both. Nova Scotia is home, she said after cracking the Top 10 list this week, but she feels deeply attached to Toronto — the city she moved to for a university degree in political science and sexual diversity studies.

She has also spent time in Calgary and Moncton, N.B.

But she understands the “very Canadian” propensity for pride in “homegrown celebrities” and even commented on it on the quiz show while referring to the late longtime “Jeopardy!” host Alex Trebek.

Roach realized she had achieved national renown when she spotted an article about herself on the satirical website, “The Beaverton.”

“That, even more than the genuine media interest, was like, ‘Oh, I’ve made it,'” she said.

It’s an interesting time to be a Canadian on “Jeopardy!”, an American show with some undeniable northern ties. The show’s setting has been dubbed the Alex Trebek stage in honour of its host from Sudbury, Ont.

Roach expressed some disappointment that her star turn on the show comes after Trebek died of pancreatic cancer in 2020.

“It is somewhat bittersweet and sad that (this streak) is happening after he passed, and that he is not getting to celebrate what is now by far the longest run by a Canadian contestant on the show,” Roach said.

The show also tends to sprinkle in some questions about Canada, and one of the head writers, Billy Wisse, grew up in Montreal.

That gives Roach an edge in some cases, but she said the show’s Americanness can also trip her up sometimes.

Thursday night’s show, for instance, featured an entire category about the state of California.

“I remember speaking to somebody at the ‘Jeopardy!’ team about that. And she was like, ‘Yeah, I was really confused about why you weren’t ringing in or getting in on any of those clues. But then I remembered you’re not from this country,'” Roach said.

As of Friday’s episode, Roach had won US$320,081 on the show, putting her in 10th place for highest earnings in the regular season. She has also qualified for the Tournament of Champions this fall, when she’ll face some of the show’s most successful players. That includes 40-game winner Amy Schneider, whose streak ended in January, just before Roach filmed her first episodes.

“I am so excited to probably lose to her,” Roach said.

For now, family, friends and fans continue to cheer her on.

He’s been watching the show for years with his wife and four kids, but lately they’ve been “watching every night on the edges of our seats freaking out,” he said.

“There’s a deeper level of engagement when you identify closer with the person,” Tomlin said Friday.

For those who know her personally, her success is no surprise.

“I always say she could have been on ‘Jeopardy!’ when she was 10,” said Jason Church, Roach’s cousin.

He has taken to advertising her performance on a block-letter sign outside the Cape Breton grocery store he owns.

Church, who runs Church’s Valufoods in the community of Marion Bridge, said it felt like an easy thing to do to support his cousin — and stake a claim on her.

“She was born in Halifax, but I call her a Cape Bretoner,” said Church, noting her grandparents and cousins live on the island.

Since her reign began, Roach’s win streak is all customers want to talk about when they visit Church’s grocery store.

“It’s the first thing someone says when they walk in the door. They go: ‘Oh my God, your cousin’s killing it.’ Then they’ll say: ‘How come she’s smarter than you?'” Church said, laughing.

With files from Lyndsay Armstrong in Halifax.