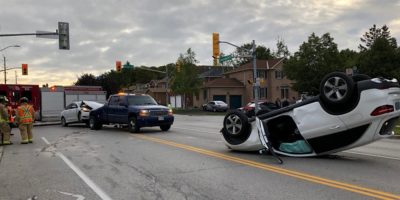 A Barrie man is facing charges after a crash shut down a north Barrie intersection.

Police were called to Livingstone and Kozlov Streets around 7:30 Thursday morning with reports of a collision. First responders arrived to find one vehicle on its roof as a result of the crash.

Nobody was hurt in the crash. Police say it appears one of the vehicles ran a red light. One driver is facing a charge of Careless Driving and Failure to Stop for Red Light.