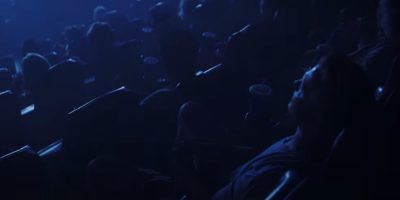 With the launch of its new brand campaign, ‘Where Escape Begins’, Cineplex is reminding people about the magic of the theatre experience.

Two years ago, movies dominated the cultural zeitgeist, occupying the hearts and minds of nearly everyone from casual viewers to cinephiles. Going to the movie used to be an event, something you marked on your calendar and eagerly crossed off days off until you could finally grab a bag of popcorn and lose yourself in the sights and sounds for a few hours.

It wasn’t just comic book movies either. Yes, we all know the Marvel Cinematic Universe was the dominating force for over 10 years and the release of Endgame was one of the most event-like cinema experiences of recent memory. However, 2019 had plenty of other event-like movies that drew people to theatres in massive numbers. We got two Disney remakes (Aladdin and The Lion King), we wrapped up a new Star Wars trilogy (The Rise of Skywalker), and we got a few fantastic sequels (Toy Story 4, It Chapter Two, John Wick Chapter 3).

While sequels, prequels, franchises, and remakes are the bread and butter of Hollywood with their moneymaking capabilities, even original screenplays were making big bucks and driving people to the theatre. The gritty and dark reimagining of the Joker (Comic book adaptation, but still original) hauled in an incredible $333 million, Jordan Peele’s follow-up horror film just missed a top ten grossing movies spot with $175 million, and Quentin Tarantino’s love letter to classic stardom, Once Upon a Time…In Hollywood earned $141 million.

In case you missed it, along with their new brand campaign, Cineplex has also released a new monthly membership that is actually quite the deal for movie lovers. The program is called Cineclub and for less than the price of a regular ticket you get one movie admission each month, the option to buy additional tickets at a discounted price (for yourself or guests), and 20% per cent of the rather pricey concession items. You can still earn Scene points too and for anyone in Barrie, you also get 20% games at The Rec Room which recently opened in Park Place! With a price tag of only $9.99 (and a cancel anytime system), it’s without a doubt the best way to hit the cinema.

The next few months are looking pretty exciting for movie fans, with No Time To Die, Dune, The Many Saints of Newark, and The French Dispatch all hitting theatres in October alone. Hopefully, a resurgence at the cinema is on the horizon, and we can’t wait.