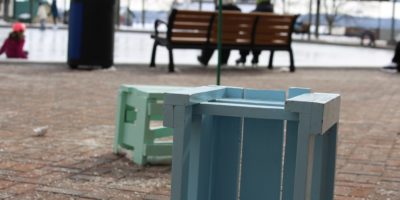 Some Barrie councillors took the time to defend the call to purchase a piece of art after claims from the public the buy was frivolous.

At Monday night’s meeting, council voted to ratify a decision to purchase the piece Soapbox, after having leased it for the past three years. This came following a deputation from a member of the public, questioning the cost, the purchase, and the intent.

Having a lease-to-own agreement in place, the city had already put down $15,000 on the work, and planned to buy it outright instead of paying year-over-year for the next three years. The money comes from a public art fund established in 2015, that is made up of “public and private donors,” according to city documentation, and not from the tax base. “It’s important for the city to remember that the funding is coming from the Public Art Reserve,” said Councillor Natalie Harris at Monday’s meeting, “This money was already set aside, it’s not like we can use the $15,000 that wasn’t spent.”

The purchase comes by way of recommendation from the Barrie Art Committee, kept at arms-length from council for a reason. “I think it is very important that we do not let politicians pick and choose what they like in public art,” said Deputy Mayor Barry Ward. “We really do have to leave this decision to the public art committee. Saying you don’t like it isn’t enough.”

The work was part of a then-temporary public art exhibition installed in 2017 to mark Canada’s 150th birthday that the city was leasing at a cost of about $5,000 a year. The project was initially paid for using a mix of existing public art funding, private donations, and grants from the province through a Celebrate Ontario fund.