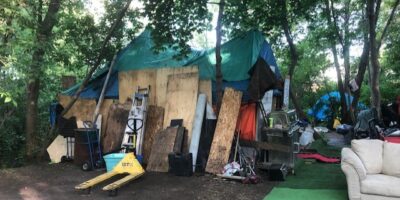 A quiet and wooded setting off of Dunlop Street West near Anne Street in central Barrie has become a hub for some of the city’s homeless population.

Time is running out for these individuals. They have been told to clear out of Milligan’s Pond by Thursday, June 18.

In a written statement to Barrie 360, the City of Barrie confirmed Municipal Law Enforcement and Barrie Police attended the site on Monday to issue new notices and they will attend to enforce the order.

The City said Mayor Jeff Lehman added an amendment to the emergency order on May 28 to allow for people to camp overnight at Milligan’s Pond for up to 15 days. In the statement issued Tuesday, the City said given the state of the COVID-19 emergency, the purpose of this was to give enforcement agencies and social services time to get together and enforce the bylaws compassionately and help the people who are at Milligan’s Pond.

At the camp on Tuesday evening, there were several individuals milling about. They were aware of the eviction notice. One man who gave his name as Rick said they have started their own petition to remain at the park. The petition mentions the homeless at Milligan’s Pond and the survival of the people staying there during the COVID-19 pandemic. The petition also said there is constant misjudgement from the community and residents.

Rick has been at the camp since last October. He said the numbers at the camp go up and down but tend to increase in the winter when people are seeking warmth.

“This a big family. We are all homeless but we band together. Some people here have drug habits or are alcoholics. There are defects in everyone. Nobody is perfect.”

Rick was pleased to let people know they had a chiminea, a fire pit and a barbecue.

“We get some food from the food bank. Others here will collect money on the highway ramps. I don’t steal. What I brought here is my own or what I have collected.”

Asked what he thought will happen on Thursday if the City acts on the eviction, Rick said he could only speak for himself. He said he wasn’t going anywhere and they would have to remove him.

Outreach staff spoke to the individuals at Milligan’s Pond to find out the reasons they chose to live in the park and what their needs were. From there, the City said through virtual meetings, the group was then able to come up with the following solutions and opportunities to assist many of the individual needs of the people living there.

The City said outreach organizations have been communicating to the individuals living at Milligan’s Pond, so they are aware that the complaints received under the City’s by-laws will be enforced.

The by-law violations listed on the enforcement notice given to the campers include camp and sleep in a park, deposit debris, foul property and damage and disturb property.