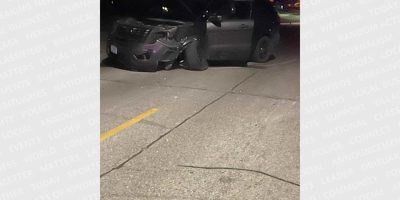 A collision between a police cruiser and a passenger venhicle has resulted in minor injuries to both drivers, and extensive damage to the vehicles.

Around 10 p.m. on Saturday, Southern Georgian Bay OPP say an unmarked police cruiser was responding to a call for service and indicated to turn left on Yonge Street in Midland when it was hit from behind by a passenger vehicle that attempted to pass at the same time.

Both drivers were assessed and treated at the hospital and have been released. A passenger in the vehicle was unharmed.

During the investigation, police say they gathered evidence to believe the driver of the passenger vehicle was impaired. A demand was made to provide a breath sample but he refused.

A 41-year-old Waubaushene resident has been charged with the following criminal code offences:

The driver’s license of the accused has been suspended for 90 days and the vehicle was towed to be impounded for 7 days. He was released from police custody to appear before the Ontario Court of Justice in Midland on September 8, 2022