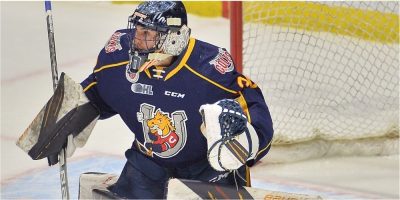 The Barrie Colts struggled early on, but an opportunistic offence combined with some solid goaltending and a strong third period has them on top in their first-round series against the Mississauga Steelheads.

Barrie scored twice on just four shots in the first period and then relied on some key stops by Matteo Lalama and a dominant final period to close out a 3-1 win over the Steelheads, Monday night, at Sadlon Arena.

The Colts now lead the best-of-seven Eastern Conference series 2-1 and can take a stranglehold with a Game 4 win Wednesday night back in Barrie.

Connor Punnett and Ethan Cardwell scored a little more than three minutes apart late in the first period for the Colts who were outshot 15-4 in the opening period and were thoroughly dominated through the first half of the contest despite leading 2-1.

Lalama, who was in for injured starter Mack Guzda, and a huge late second-period penalty kill would help the Colts hold the fort until a strong effort in the third, that included an insurance marker from Hunter Haight, sealed the deal.

“I thought we started to come in the second period,” said Colts head coach Marty Williamson. “We didn’t play the whole 20, but there was a spurt in there where we started to look like our team again.

“We couldn’t execute at all in the first period and couldn’t get our legs under us. We were playing a little slow and they had more speed, but I thought in the second it started to even out a little bit and then in the third I thought we played a real controlled good period of hockey and gave ourselves some good looks.”

The Colts began to show signs of life when Declan McDonnell lowered the boom on Max Dodig at centre ice and sent the Mississauga forward flying over him after a clean hip check.

The momentum shift continued late in the second when Barrie killed off a four-minute high sticking penalty to Ian Lemieux.

“Every practice we work on our penalty kill,” said Colts defenceman Artur Cholach. “We were prepared for this and came through. We were ready.”

The double minor could have been a disaster for Barrie had the Mississauga power play come through. A late tying goal would give the Steelheads all the momentum heading into the third.

Lalama also came through with what might have been a game-saving stop in the dying seconds of the period.

Chas Sharpe teed up a one-time blast from the top of the faceoff circle off a cross-slot pass, but Lalama slid across and threw out his right pad to protect Barrie’s one-goal lead.

“A real big stop on that penalty kill,” said Williamson. “We’d done such a good job (killing the penalties) and then we kind of got a tired group out there and they get that cross-seam pass and hit that shot, and he made a big save there.”

The Colts’ backup was thrown into action after Guzda, who was outstanding in the opening two games of the series, was scratched and is now listed day-to-day.

Lalama stepped into a tight series with increasing intensity and gave the Colts exactly what they needed. He gave them a chance to win, stopping 28 of 29 shots.

James Hardie’s power-play marker, on the power play late in the first period, was all he would give up. He was solid all night.

Barrie fed off that momentum into the third and never looked back, outshooting Mississauga 10-3. They kept their opponents in check the rest of the way.

Cholach helped provide some insurance early in the frame with a nice set-up.

The Vegas Knights prospect waited patiently with the puck at the Mississauga blue line before walking past two defenders along the left side and put it on the tape for a charging Haight, who tipped it in.

“It was a great play by Haight,” said Cholach. “He put his stick down I just placed a pass on his stick and he took care of the rest.”

The Colts didn’t have many offensive chances in this one, especially early on, but the opportunistic club took care of business when they had to.

A big part of that was a much-improved effort to get bodies to the front of the net and keep Mississauga goalie Roman Basran off balance.

All three goals had Barrie players going to the net.

“We talked about it between the second and the third,” said Williamson. “We’re making it tough on ourselves with some of the things we’re doing. We need to get consistent with that. Our defence did a good job getting pucks through. One was kind of a rebound and one got through to the net.

“It’s a work in progress. We’re piecing the lineup together. No Brandt (Clarke). No (Beau) Jelsma. No Guzda. We’re piecing it together and getting through hockey games.”

The Colts will look to hang on to home-ice advantage on Wednesday.

“Same thing down there, we really wanted to win both and now it’s win both at home,” said Williamson, whose club split a pair of 2-1 overtime decisions in Mississauga. “Hopefully we get some bodies back towards the weekend.”

ICE CHIPS: Guzda and Jelsma remain day-to-day. . . Much like most of the team, Cholach saved his best for last. “I thought Cholach was outstanding in the third,” said Williamson. “He seemed to be out of sorts early in the game and then really got it together in the third period. . . With this being the third game in the three nights, the Colts needed some key minutes from their fourth line of Zach Wigle, Chris Grisolia and Roenick Jodoin and they got them. “Grisolia is good every game for us,” said the Colts head coach. “He just plays the same way and plays hard. He’s not the fanciest guy out there, but he just plays real hard and it’s infectious. . . Mississauga outshot Barrie for the third straight time this series, 29-20. . . The Colts were held scoreless on three power-play chances, while the Steelheads finished 1-for-4. . . It’s been a tough start to the series for Steelheads No. 1 centre Luca DelBelBelluz, who is pointless after the first three games.