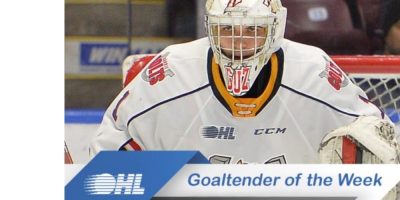 Barrie Colts netminder Mack Guzda has been named the OHL Goaltender of the Week after playing to a 2-0 record with a 0.96 goals-against average, .967 save percentage and one shutout.

Guzda helped the Colts defeat the Central Division-leading North Bay Battalion on consecutive nights, first making 32 saves at home on Saturday before turning away all four Battalion shootout attempts in a 3-2 victory. Guzda followed-up with his sixth career OHL shutout on Sunday in North Bay, making 26 saves as the Colts skated to a 1-0 triumph on Evan Vierling’s third period game winner. Guzda earned first star honours in both outings, helping the Colts climb back into the Central Division conversation with their fourth and fifth straight wins.