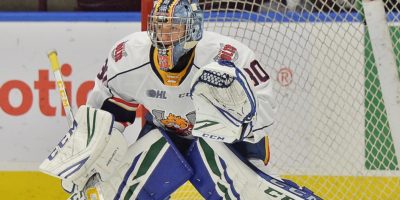 A little resilience on the road Sunday night in Oshawa went a long way to helping the Barrie Colts complete a three-game weekend sweep.

After giving up the tying goal late in the game, the Colts bounced right back with overager Josh Nelson scoring his second of the game 2:56 into overtime to give them a 3-2 win over the Generals at the Tribute Communities Centre.

Barrie built a 2-0 lead on a pair of early second-period markers by Tyson Foerster and Nelson, but Collingwood native Allan McShane cut the lead in half for the home team a little more than two minutes later.

Then, with the Generals pouring it on the third, Philip Tomasino batted in a McShane pass in front to even the contest with just 5:44 remaining.

Barrie would finish off its best weekend in over two months when Nelson picked up the loose puck along the boards inside his own blue line and raced down the right side before wiring a low shot past Jordan Kooy.

“A big thing for us is always getting these guys pushing the pace and playing a solid game,” said Colts interim head coach Todd Miller, who has three wins since taking over behind the bench for Warren Rychel early last week. “I thought the work ethic was there. It covers up a lot of mistakes at times when you can outwork your opponent.”

It’s been an up and down year with injuries decimating the lineup, but the Colts (19-21-2-2) are finally getting healthy and it’s paying off.

“I think hard work has been the reason for this change, but obviously having some players back really helps,” Miller said. “We can put more guys out there and we can give some guys some rest.”

While blowing a lead to force overtime for a second-straight night, the young club found a way to compose themselves late and grab the win.

“Everybody has bought into how they need to play if they want to win,” added Miller, whose club stormed out to an early 6-0 lead Saturday night against the Hamilton Bulldogs only to need an Aidan Brown overtime winner to squeak out an 8-7 win. “I think this weekend is going to really build a lot of confidence in our kids. They talked about (Saturday’s) game today and just how you got to manage the game better.

“They’re learning something new every day and they’re running with it. I’m real proud of them this weekend. We’re going to go into next week off a great weekend with the confidence to know we can beat any team on any given night.”

Nelson, a trade deadline acquisition from London, is beginning to hit his stride. Tasked with a bigger offensive role in Barrie, the veteran is making the most of it. He has four goals and an assist in the last three games.

“And what a great kid too,” Miller said of the Lockport, IL native. “He’s a guy in the room that everybody respects, which says something. He’s having fun with the game now and I’m letting him play in the offensive zone. I’m not telling him this or that. It’s just take care of your own end and have fun with this.

“He’s got a smile on his face every day. He’s very approachable for the other young players, which also is great because guys look up to him. He’s having a real fun time in Barrie and I’m real happy to see him starting to get some goals here now.”

Goaltender Arturs Silovs had another big effort against the Generals. After stopping all 19 shots in collecting his first OHL shutout on Thursday, the Latvia native kicked aside 34 of 36 pucks on Sunday.

He made several impressive stops, especially in the third when the Generals (23-16-4-2) were pressing hard.

“He’s not jumping out of the net so much and letting the puck come to him at times, which is a lot better for him,” Miller said. “We’re real confident in him and Jet. They’re both playing well. We keep getting that goaltending and giving them some help we’re going to give ourselves a chance to win every night.”

The Colts return to action Thursday night when they host the Sudbury Wolves. Game time at Sadlon Arena is 7:30 p.m.

ICE CHIPS: Brown drew an assist to run his point streak (1G, 5A) to five games…Oshawa’s Brett Neumann thought he had the equalizer in the third, but the goal was called back after a lengthy review showed Kyle MacLean’s right skate made contact with Silovs…Matthew Sredl isn’t ready to return to the lineup. “He could be another week, he’s still got a shoulder issue,” Miller said of the defenceman…Nathan Allensen is awaiting a decision on a suspension from the league after he got tossed from Saturday night’s win. Allensen drew a fighting major, instigating misconduct and a 10-min misconduct for jumping Hamilton’s Nathan Staios late in the second after he nailed Ethan Cardwell at the blue line.