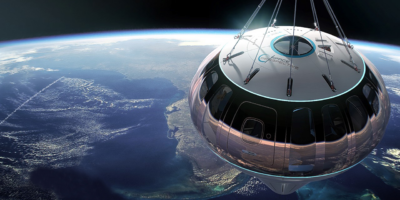 Researchers, armchair astronauts and even brides and grooms looking for an out-of-this-world wedding experience will be able to celebrate, collect data or simply enjoy the view from an altitude of 100,000 feet (30,000 metres) in a balloon-borne pressurized cabin, complete with a bar and a restroom, a space startup announced Thursday.

“Spaceship Neptune,” operated by a company called Space Perspective from leased facilities at NASA’s Kennedy Space Center, will carry eight passengers at a time on six-hour flights. The passenger cabin, lifted by a huge hydrogen-filled balloon, will climb at a sedate 12 mph (20 kph) to an altitude of about 30 miles (50 kilometres) high. That will be followed by a slow descent to splashdown in the Atlantic Ocean where a recovery ship will be standing by to secure the cabin and crew.

While the company initially will operate out of the Florida spaceport, the system could be launched from multiple sites around the world, with Hawaii and Alaska near-term possibilities.

Ticket prices for crewed flights have not yet been set, but company officials said Thursday the initial cost will probably be in the neighbourhood of US$125,000 per passenger. That’s about half what space tourists can expect to pay for sub-orbital flights aboard rocket-powered spaceplanes like those being developed by Virgin Galactic, which are designed to reach altitudes of more than 50 miles (80 kilometres).

Spaceship Neptune will fly well under that altitude and passengers will not experience weightlessness, but they will still be above 99% of Earth’s atmosphere, nearly twice as high as the supersonic Concorde once flew. And unlike shorter sub-orbital rocket flights that only spend a few minutes at the top of their trajectory, Neptune passengers will enjoy two hours at peak altitude, taking in the view through large, wrap-around windows.

“One of the amazing things about the design we’ve been able to work up is the ability to have events, things like weddings, corporate events. I can’t wait to see spiritual leaders flying with political leaders,” said Space Perspective founder and co-CEO Taber MacCallum.

“I think we’re going to see a wide variety of flights. Science flights are going to be really interesting, mixing tourism and science. The imagination runs wild. We’re getting lots of interest in all types of great ideas.”

Space Perspective has signed a Space Act Agreement with NASA and the company has arranged to lease a facility at the 3-mile-long (5-kilometre) runway once used by returning space shuttles. Neptune flights will be regulated by the FAA’s Office of Commercial Spaceflight.

“Space Perspective is bringing a fundamentally new capability to the Cape, which will enhance the offering we have in Florida for space-related research and tourism,” Space Florida President and CEO Frank DiBello said in a statement. “Its presence here in Florida creates not just job and supply chain opportunities, but opportunities for civilian astronauts to experience this planet Earth from the edge of space, a privilege previously available to only a few.”

“When we take all the people that we want to take to the edge of space, we want them to really be able to experience what astronauts talk about, seeing the Earth in space (and) doing it comfortably, gently and accessibly,” Poynter said during a teleconference.

“There’ll be eight people at a time, with a crew member in the capsule. And of course, you’ll be able to connect with your friends on the ground. And we’ll have some really great communication systems so that we can have all kinds of live events up there as well. The whole capsule has been designed to be really flexible to allow for all kinds of things to go on and up in the space environment.”

As for weddings, she said Neptune will provide “the best place to get married, ever.”