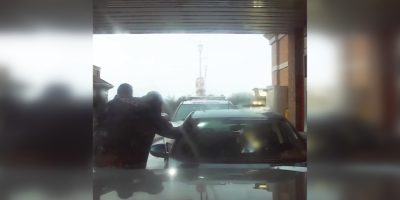 A wake up call from police, right in the drive-thru.

York Regional Police have released a dash cam video shot Sunday, after police claim a driver passed out behind the wheel at an Aurora drive-thru.

DRIVE-THRU IMPAIRED – For those who doubt that impaired driving is a very real problem, we share this with you. Happened at 5pm yesterday in Aurora. The driver, who was completely passed out, blew more than 4x the legal limit. #ThisIsNotOK #NotOneMore https://t.co/RfcUc1GS6a pic.twitter.com/z4wGy7thNd

After police knocked on the window for nearly a minute to rouse the driver, officers claim they blew more than four times the legal limit.