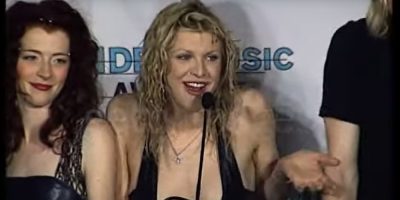 A clip of Courtney Love speaking her mind about fashion and dressing nicely has been unearthed and is now viral on Tiktok.

For a few years before the original clip was recorded, Love was being criticized and constantly under the microscope for dressing “pretty,” most notably for her appearance at the previous year’s Oscars. She was accused of selling out for not dressing very ‘rock & roll.’

She finally shut everyone up when she explained, as only she could, that a lot of women simply like to dress nice.

“We as females have thousands and thousands of years of fashion in our DNA!” she explained.

Now, 24 years later, this great TikTok trend has women of all shapes, sizes, and style choices happily showing their outfits with Courtney’s words playing in the background.

Love posted the original clip on her Instagram with the caption reading,

“so it’s 1998 and I’ve had it with being dragged by everyone for DARING to dress nice for the Oscars. It’s quite funny to see this moment trending. Thank you. You are forgiven 1998!”

Since the 90’s, Love has been responsible for the iconic grunge looks we still see today. And although she’s left a lot of those looks behind, she continues to be a fashion trail blazer, even earning a campaign with Versace.

Her daughter” Frances Bean Cobain, is huge in the fashion world. The model has worked with major names like Marc Jacobs, and collaborated with designers on her own fashion line.