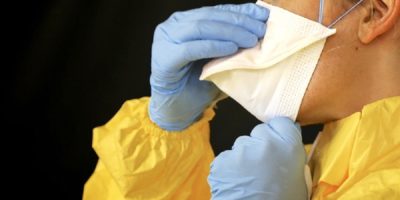 On a warm New York City summer morning a few years back, Jacob LaMendola, then in his late 20s, smelled chocolate for the first time. It was, as far as he can tell, the first time he’d smelled anything. Ever.

“I cried because I knew what it was,” he says. “It was chocolate.”

LaMendola has anosmia, or a complete inability to detect smells. On that memorable morning, the now 32-year-old Brooklyn filmmaker was standing near a Union Square chocolate shop when he was overcome with a certainty that he was, finally and inexplicably, experiencing that mysterious thing others called smell — not just in his imagination, but in his body.

“Something in my brain just got it,” he says. “It was amazing. I would go back there and see if I could smell it again, but it never happened.”

LaMendola is fairly sure he was born with the condition, though he didn’t fully realize it until about fifth grade. Little clues started to add up. When classmates laughed about a kid farting in the cafeteria, he didn’t get the joke. When a friend at camp put cologne on LaMendola’s wrist and told him the smell would help him get girls, the suggestion made no sense.

For LaMendola, anosmia is a familiar, accepted part of navigating the world — generally “not that big of a deal,” he says. But others find their lives dramatically upended when they suddenly lose olfaction due to head injury, nasal tumors, radiation or viral infections. Mounting anecdotal evidence suggests patients with COVID-19 are among that latter category.

Though millions of people worldwide can’t smell, those who work in the field of olfactory disorders say anosmia isn’t nearly as well known and understood as sight and hearing loss, and in some cases gets overlooked or ignored by medical professionals. The condition is, however, receiving heightened attention amid the coronavirus pandemic.

In Germany, at least two in three confirmed COVID-19 patients have anosmia, according to a joint statement from Claire Hopkins of the British Rhinological Society and Nirmal Kumar, president of ENT UK, a professional body representing ear, nose and throat surgeons. In South Korea, 30% of patients testing positive have had anosmia as their major presenting symptom in otherwise mild cases.

The increase in COVID-19 patients reporting a temporary loss of smell is so significant that in some countries, such as France, people who experience sudden olfactory loss are diagnosed as having COVID-19 — without even being tested. AbScent, a UK organization that aims to raise public awareness of smell loss, now posts the following message at the top of its homepage: “AbScent advises that if you experience sudden-onset smell loss that you quarantine immediately for a minimum of seven days.”

Scientists in Italy, Iran and Iceland are already producing studies on the phenomenon. Researchers from Israel’s Weizmann Institute of Science and Edith Wolfson Medical Center, meanwhile, have even developed an online platform, SmellTracker, that lets visitors measure their smell perception. The five-minute test taps common household goods like toothpaste and vinegar to detect early signs of COVID-19. The tool has identified potential coronavirus cases that were later confirmed, the researchers report.

But what’s it actually like not to be able to smell freshly cut grass, brewing coffee, hand lotion, a skunk, that distinct new-car smell? A study out of the UK’s University of East Anglia published late last year in the journal Clinical Otolaryngology found smell loss can disrupt almost every aspect of life, from the practical to the emotional.

“I lost many of the emotional peaks of life’s experiences — less joy, less excitement,” says Duncan Boak, whose sense of smell disappeared in 2005 as a result of a head injury. Boak founded Fifth Sense, a UK charity for people affected by smell and taste disorders that’s part of the Global Consortium on Chemosensory Research exploring links between COVID-19 and olfactory loss.

Most obviously, anosmia impacts taste, with some describing a dulling so dramatic it’s like shifting from living in color to living in black and white. Anosmia can cause insecurity over personal hygiene and fears about not being able to detect potential hazards like smoke or gas leaks.

“It impacts people’s ability to feel safe in their own homes,” says Dr. Zara Patel, an associate professor of otolaryngology and director of endoscopic skull base surgery at Stanford University Medical Center who’s treated many patients with the condition.

It can also diminish sexual intimacy and challenge personal relationships.

“People will tell me they long to be able to smell their husband or wife again, in the way they used to,” Patel says, “or they just wish they could smell their child.”

In a short documentary from LaMendola titled Anosmia, one dad with the condition wistfully imagines what his son smells like: “I think he smells sweet, and like a kid. I wish I knew.”

The concept of smell can be hard to describe even for those who don’t have olfactory problems. It’s esoteric and personal, tied to memories of people, places and experiences that evoke joy, grief and longing.

Yet for all its mystery, smell works scientifically. When you take a whiff, an odor molecule stimulates nerve cells high up in your nose. The cells send an electrical signal to the olfactory bulb, a structure at the base of your forebrain that extends to the roof of the nasal cavity. The bulb then relays the signal to other areas of the brain for additional processing.

Sometimes some part of that system malfunctions, leading to anosmia or hyposmia, a reduced sense of smell.

Post-viral anosmia is one of the leading causes of smell loss in adults, accounting for up to 40% of cases, according to the British Rhinological Society. It’s not yet known how many COVID-19 patients have experienced it or whether it’ll cause lasting impairment. For now scientists can only rely on anecdotes and extrapolate from smell loss associated with colds and flu.

“The majority should see recovery in days to weeks, a smaller subset from weeks to months … and the smallest group will see only partial recovery or permanent anosmia or hyposmia,” says Steven Munger, director of the University of Florida’s Center for Smell and Taste.

There are a number of hypotheses for why some COVID-19 patients lose their sense of smell. The favored theory, Munger says, is that the virus targets non-neural cells, such as glandular cells, in the olfactory epithelium, the nasal tissue involved in smell.

“This could potentially lead to processes like inflammation that disrupts the overall ability to detect odors or to efficiently send that odor information to the brain,” he explains. It’s a theory Harvard scientists are advancing in a new study, submitted to the bioRxiv repository on March 28, that has yet to be peer-reviewed.

LaMendola, who’s lived without smell his whole life, never thought the condition posed a threat. Until the coronavirus crisis. “I’ve thought I wouldn’t know early on possibly that I was sick,” he says. “I worried a little bit that I wouldn’t know right away.”

Various factors determine the extent to which smell can return, says Patel of Stanford University, including the cause of the loss, the patient’s age and how quickly care is sought.

“The earlier they can get to a specialist like me to get some form of treatment, the better the chance we can help them,” she says.

The treatment with the highest level of success, Patel says, is something called olfactory training, which is like at-home physical therapy aimed at reconditioning the brain’s ability to smell. A doctor like Patel recommends specific scents to be sniffed — usually twice a day for up to six months, for about 15 seconds per smell. The scents vary per patient, but Patel typically starts with rose, clove, lemon and eucalyptus.

“What is important is for people to focus on their memory of that smell,” she says. “That appears to be a very important part of this training process, because the olfactory cortex is right next to the memory center in the brain and that can be very helpful in re-creating that correct pathway back to the cortex.”

Anyone who’s smelled the ocean and been transported to childhood summers at the beach or felt an overwhelming wave of paternal love from smelling their late dad’s sweaters knows how powerful the link between scent and memory can be. Having that connection severed can be especially jarring for those with anosmia.

“Bonfire night, Christmas smells, perfumes and people — all gone,” Carl Philpott of Norwich Medical School, one of the University of East Anglia study’s researchers, says in a summation of the research. “People who have lost their sense of smell miss out on all those memories smell can evoke.”

Smell-triggered memories are one of the pieces LaMendola misses most, too, even though he can only imagine what they feel like. “When somebody talks about smelling something that reminds them of a memory,” he says, “that’s the most special part of it that I’ve never experienced.”

Hope amid the losses

Past research has shown that people who’ve lost their sense of smell report high rates of depression, anxiety, isolation and interpersonal difficulties. “It had a big impact on relationships with partners,” Fifth Sense founder Boak says. “There’s a gap that’s difficult to bridge, a disconnection.”

For the University of East Anglia study, scientists interviewed 71 participants between 31 and 80 who contacted the Smell and Taste Clinic at the UK’s James Paget University Hospital. The researchers carried out their study in collaboration with the charity Fifth Sense and found the wide-ranging impacts of smell loss were compounded by a lack of knowledge of the disorder among clinicians.

Dawn Millard, whose 15-year-old daughter Abi was born without a sense of smell, recalls years of feeling alone and misunderstood as she struggled to find doctors who could diagnose and help her child. Dawn began to suspect something was amiss early on, when, as a toddler, Abi didn’t react to any smells, intoxicating or horrid.

“Doctors didn’t know what to do,” recalls Millard, who lives in Dorset, England. “I was told by an ENT doctor, ‘Well if you had to lose one sense, that would be the one.’ A shocking comment to make to a child missing one of their senses … No one seemed to understand or take us seriously.”

Eventually she discovered Fifth Sense, which she credits with finally helping her and her daughter feel heard and supported. Abi, who had an operation that temporarily gave her a 10% sense of smell, has raised money for the charity, and she shared her story at Fifth Sense’s five-year anniversary conference.

“I will do as much as I can to help anyone with the condition,” she says.

Boak has found his own comforts as he maneuvers the world without a sense he once took for granted. One of them is cooking — despite not being able to appreciate much flavor, he experiments with tastes and textures. “I really hone in on making the best of my remaining sensory abilities,” he says.

He also derives purpose from educating the world on a condition he believes too few have heard of. And connection from knowing others who suffer from it.

“One of the powerful things for me with starting the charity has been meeting other people affected by olfactory disorders and sharing and learning,” Boak says. “This is so important in coming to terms with a loss that most people don’t understand.”