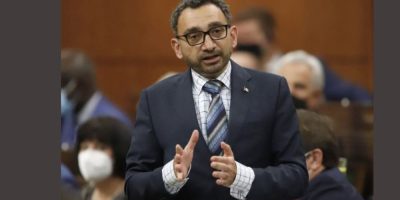 Transport Minister Omar Alghabra has told the House of Commons transport committee that COVID-19 is to blame for airport delays.

The minister says Canadians have witnessed significant disruptions in the economy because of the pandemic and that the government is working on tackling those issues.

He says it is labour shortages that are primarily contributing to delays.

Alghabra, who recently tested positive for COVID-19, appeared via video conference along with a number of other officials.

In his testimony, Alghabra also defended the ArriveCan app, saying it has helped reduce wait times by digitizing the process.

Last month, due to a glitch, ArriveCan instructed about 10,200 travellers to quarantine for 10 days when they didn’t have to.

Bianca Wylie, a partner at Digital Public, questioned why the app would be automating those decisions in the first place, rather than sticking to the information-collection mandate it was launched with.

Conservative MP Melissa Lantsman asked Alghabra if the federal government bears any responsibility for the delays at airports that have wreaked havoc on travellers for months.

“I blame it on COVID,” Alghabra replied.

Airlines and airports have been grappling with a surge in customers this summer, compounded by staffing shortages affecting both carriers and federal agencies.

Alghabra said part of the reason Canadian airports have been especially affected by delays is a sharp increase in demand. He said travel surged by 252 per cent between January and August, compared with 63 per cent in the United States.

Some experts have pointed to airlines overbooking flights as being responsible for delays.

Air Canada announced in June that it would cut more than 15 per cent of its schedule in July and August — more than 9,500 flights — due to the strained air transport system. Meanwhile, WestJet said it “proactively” removed flights from its Pearson schedule, anticipating summer travel snarls.

Transport Canada says in a recent statement that it has been working with industry partners to improve conditions at airports and says there were fewer cancellations and delays in the first week of August compared with a month ago.

Banner image: Omar Alghabra rises during Question Period in the House of Commons on Parliament Hill in Ottawa on Monday, June 20, 2022. The transport minister will testify today before the House of Commons transport committee on airport and airline delays that have wreaked havoc on travellers over the past several months.THE CANADIAN PRESS/ Patrick Doyle