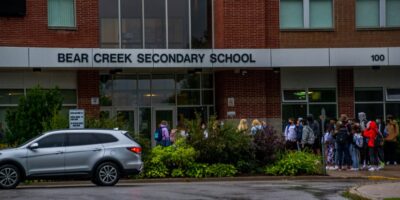 Many students across Simcoe County went back to school on Tuesday, for the first time in over six months. That includes students at Bear Creek Secondary in Barrie, where large clusters of students could be seen.

Barrie 360 was at several schools to see how the return to the classroom is going over and noted large gatherings in front of the west-end school. The majority were wearing masks.

It is expected the kids heading into school will soon learn not to gather in such a way. “What we’re really focusing on in the first few days, at our secondary schools and at our elementary schools, is really going through the teaching process of making them understand the importance of cohorting, the importance of wearing their masks, and the importance of physical distancing,” said Simcoe County District School Board Superintendent of Education Dawn Stephens.

“We are going to see young people out in our communities more than we have,” she added. “It’s really important that we have parents as partners in all this. When kids are out after school hours, out and about in the neighbourhood, we need our parents to be reminding them social distancing is still a really important part of our everyday life.

The Simcoe Muskoka District Health Unit’s (SMDHU) Medical Officer of Health Dr. Charles Gardner says this might be a case of COVID-19 fatigue. “I think its something we’re all vulnerable at this time,” said Gardner during his weekly update. “What we’re asking of people is not natural of people, that they limit their social contact with other people, that they maintain a distance from people, it’s not natural for us.”

“This is limiting to the quality of our lives,” he added.

“Gathering in front of schools like that has the potential to lead to it,” said Gardner, speaking of the risk of transmission.

“We are seeing an increase in the number of contacts in a number of our cases,” Dr. Gardner said. “Before, we had maybe three contacts per case in the past, a month or so before. Now we’re seeing in the range of seven contacts per case. That is an indication that people are increasing their social circle, that they’re interacting with people, that they’re getting fatigued with abiding by the message that we’re giving.”

“It’s just part of the challenge of it all,” he concluded.

On Tuesday, the SMDHU confirmed 17 cases of COVID-19 since its update on Friday. Province-wide, there were two sets of numbers released, due to a lack of update on Holiday Monday. There were 190 cases yesterday, and 185 today, the highest the province has seen since late July.