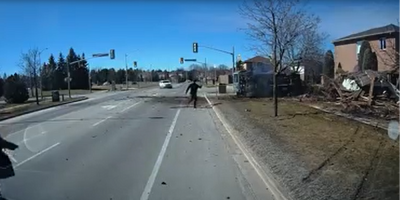 The dashcam was rolling moments before a pickup truck left a trail of destruction ending at the corner of Hurst Drive and Golden Meadow Road.

The Barrie Police Service says the driver of the pickup, a 31-year-old Bradford man, was taken to hospital as a precaution following the crash. He was then taken to police HQ and has been remanded into custody.

Two others were treated on scene and released with minimal injuries, according to police spokesperson Peter Leon, who said the whole situation could have been a lot worse if it were a bit warmer out. “I think we’re very fortunate that, given the weather that we had on Thursday, that wasn’t the case on Saturday, because a lot more people would have been out enjoying themselves, certainly enjoying the weather, being out with their families,” Leon told Barrie 360. “We could have dealt with a very different set of circumstances.”

The man behind the wheel faces charges including impaired driving, dangerous operation of a motor vehicle, refusing to provide a breath sample, and possession of a prohibited weapon.