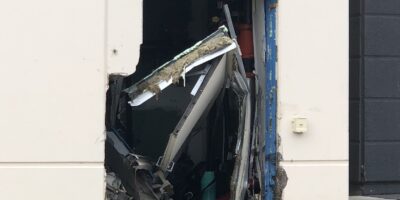 Someone put a hole in the side of a north end Barrie gym, and police say drunk driving charges have been laid as a result.

Barrie Police were called to the North Barrie Crossing Shopping Centre around 9:30 Monday night with reports of a crash. A vehicle had struck the LA Fitness facility.

A 25-year-old driver has been charged with drunk and dangerous driving.