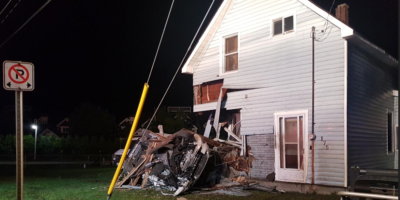 A Christian Island man is facing charges of Drunk and Dangerous Driving, after a vehicle ended up resting against a house in Midland.

The crash happened around 3:00 Wednesday morning; Southern Georgian Bay OPP say a vehicle first struck a guardrail before hitting the corner of a home, causing extensive damage. Five people in the vehicle, four of them were taken to Georgian Bay General Hospital for treatment of injuries, and later released.

A 27-year-old man has since been charged. His driver’s licence has been suspended for 90 days, while he was handed an early-October court date to answer to charges laid.