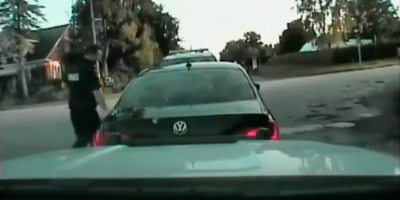 A video by way of York Regional Police gives us a glimpse of what a drunk driving arrest looks like, beginning to end.

IMPAIRED – Another impaired driver found asleep at the wheel. Thankfully a concerned citizen called 9-1-1 and we were able to get this driver in custody and off our roads. Safe roads, your call. #NotOneMore pic.twitter.com/CcjwqoyZ9D

It starts with a 911 call from someone who came across a running car, in gear, stopped at the intersection of Concession 7 and Lloydtown Aurora Road in King Township. The the caller told emergency services the driver was passed out with foot on brake. Police arrived, boxed in the vehicle, and then banged on the glass to rouse the sleeping beauty that allegedly reeked of booze. Officers claim an open bottle of alcohol and some cannabis was found in the vehicle.

A 19-year-old King Township man is facing a series of charges.