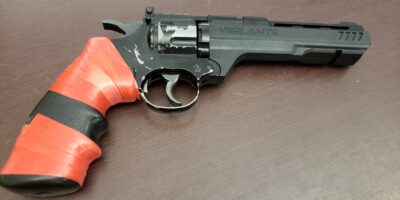 A call about a man with a gun has ended with charges laid, even though the gun was a fake.

A call came in to Nottawasaga OPP detachment around 6:30 Thursday morning, regarding a man with a firearm in the area of River Drive in Essa Township. Officers quickly rushed to the scene and located a suspect. A replica handgun was seized.

A 30-year-old man from the Municipality of Marmora and Lake, in eastern Ontario, is facing charges of possession of a dangerous weapon, carrying a concealed weapon, and using an imitation firearm while committing an offence.

Nottawasaga OPP is asking residents or businesses in the area to reach out if they’ve captured the suspect on security camera. Contact the OPP at 1-888-310-1122 if you have any information.