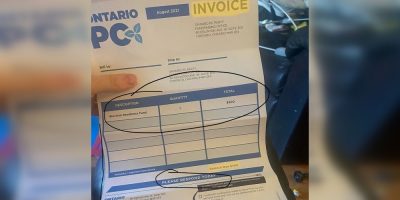 Elections Ontario and the OPP have been asked to investigate after reports of fake invoices, seemingly from the Ontario PC Party.

Images of the correspondence appeared on Reddit and other social media, a fundraising request that took the form of an invoice which appeared to indicate the receiver owed a sum of money to the Ontario PC Party. Amounts of $300 to $800 have been reported. The Ontario Liberal Party says it is officially requesting an investigation into these alleged fundraising tactics, calling it an example of a false billing scam.

“Please pay the enclosed invoice to send Doug Ford the clear message that we’ve got his back,” reads the letter. It mentions the word invoice three times.

“People are already struggling financially thanks to the pandemic. The Conservatives’ apparent attempt to potentially scam vulnerable people out of what little money they have left is despicable,” said Ontario Liberal Party President, Brian Johns.

The Canadian Anti-Fraud Centre defines a false billing scam as “receipt of an unsolicited invoice and demand for payment, where no product or service was requested.”

Barrie 360 has reached out to the Ontario PC Party but has yet to receive a reply. The Premier’s Office directed all inquiries to the party itself.