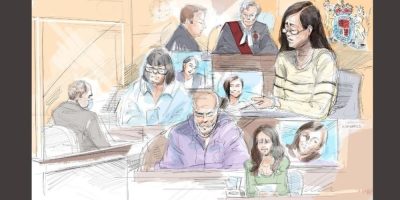 Before sentencing the man responsible for Toronto’s deadly van attack to life in prison, the judge presiding over the case took a moment to address “the elephant in the room.”

Justice Anne Molloy, whose voice cracked numerous times as victim impact statements were delivered in court, explained that the parole ineligibility period for the mass murderer had to be limited to 25 years due to a recent Supreme Court decision.

But that didn’t mean the powerful and emotional impact statements were for nothing, she assured victims and families who had wanted more.

“I must address the elephant to the room … The fact that I cannot, and I am not, imposing more than the 25 year-parole ineligibility does not mean that everything you said was not important,” she said on Monday.

“It was very important. I have listened to and read every single word.”

The explanation from Molloy was one of the most recent examples in which the judge, who has overseen the case since pretrial motions began, made a point to ensure victims were supported through the legal process.

“The sentence I am imposing today for these murders is a life sentence, which means just that, a sentence for the rest of this man’s natural life. It is not a 25-year sentence,” she told those gathered in court Monday.

“All that happens on the 25-year anniversary date of these murders is that the offender can ask the parole board to consider releasing him on parole.That does not mean he will get parole.”

The prosecution in the case against Alek Minassian, who killed 11 people and injured 15 others in his rampage, wanted to stack parole ineligibility periods. But Molloy waited more than a year after finding the killer guilty to proceed with sentencing because she wanted to hear the highest court’s ruling.

On Monday, she urged survivors and victims’ families to read the full Supreme Court decision.

“This is the unanimous decision of the highest court in our land,” she said. “And its reasoning is impeccable.”

Earlier in the day, Molloy responded personally to more than 20 people who spoke or had their victim impact statements read in court.

“I admire your courage, I am so sorry this happened to you,” she told the first speaker, Janet Jiang, a bystander who tried to save one victim, and has blamed herself the past four years for not doing so.

She listened intently to Robert Forsyth, who described the hole in his family after his 94-year-old aunt, Betty Forsyth, died in the attack.

“Thank you for being here,” Molloy said, her voice catching. “I know she was 94, but it doesn’t matter, does it.”

After Rocco D’Amico spoke through tears about his daughter, Anne Marie D’Amico, who died at the age of 30, Molloy thanked him for keeping her memory alive after the family started a foundation that’s raising money to help women and children live free from violence.

“She’s vital and with us still in so many ways because of you,” Molloy said.

Partway through the day, the prosecution filed a drawing by nine-year-old boy who lost his mother in the tragedy. The sketch shows a bright yellow sun shining down on the boy and his mom.

“It’s lovely,” Molloy whispered before wiping away a few tears.

Another victim, Amaresh Tesfamariam, died more than three years later from injuries she suffered in the attack. The 65-year-old never left hospital after being paralyzed from the neck down and needing a ventilator to breathe. But she died nine months after the judge’s verdict on the count of attempted murder. Molloy issued a life sentence Monday for the attempted murder of Tesfamariam.

Outside court, Tesfamariam’s niece reflected on the judge’s decision.

“What she said in her sentencing is what we needed to hear to be able to start to heal and find a way to move forward,” said Luwam Ogbaselassie.

Several others thanked Molloy in their prepared remarks.

First-degree murder cases are, by law, supposed to be in front of a jury, but the prosecution and defence sought consent from the attorney general to go it in front of a judge alone. Then the pandemic hit, which delayed the trial for months.

When the trial finally got underway in November 2020, it was the first high-profile case in the province to take place over videoconference.

Molloy, presiding from her basement, allowed the lawyers involved to do away with their mandatory court robes – she did the same.

She also warned her cat may make an appearance on the screen and smiled when other pets showed up unannounced on others’ screens during trial.

In March 2021, Molloy donned her robes and delivered her verdict – one in which she refused to name the killer, noting infamy was one of his motivations.

“If any case like this should arise in the future, it is my fervent wish that, at the very outset, careful consideration be given to withholding publication of the name of the perpetrator,” she said.

On Monday, she thanked the survivors and relatives of the victims.

“You’ve reached into my heart and touched me in a very profound way,” she said, her voice cracking once more.

This report by The Canadian Press was first published June 14, 2022.