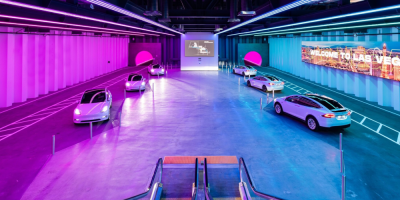 Before we’re able to move traffic to the skies above our cities, the next best thing is to stick it underground and Elon’s Musk’s Boring Loop aims to do just that.

Built 40-feet below the Las Vegas Convention Centre, the Boring Loop is 1.1 km long and 12-feet wide with colour changing LED lights lining the entire interior. There are three passenger stations dotted around the loop where a fleet of 62 Teslas drive one way (and non-stop) picking up passengers. The convention centre above normally takes around 25 minutes to cross, but thanks to the Boring Loop, it only takes 2 minutes. Wait times are limited as well with tests on the loop providing a figure of 4,400 passengers an hour.

This is the second such loop to be built, the first one being in California, however, this is the first one that is fully operational and open to the public. The plan, in time, is to extend the loop from downtown Las Vegas to the city’s central tourist hubs, stadiums, and airports.

Feature image courtesy of The Boring Company via boringcompany.com