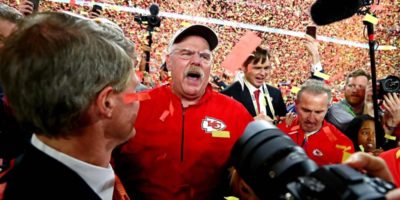 If you’re not into watching the Super Bowl but also hate being left out, here’s what you missed from super Sunday.

Chiefs quarterback Patrick Mahomes led two fourth-quarter touchdown drives to erase a 20-10 deficit and take a 24-20 lead. Mahomes accounted for three touchdowns. The Super Bowl victory marked the first as a head coach for the Chiefs’ Andy Reid – who’s been coaching in the NFL for 21 years.

Jennifer Lopez and Shakira performed the halftime show at the Hard Rock Stadium in Miami Gardens. They performed their hits…

With his future in limbo after some cryptic social posts and pen yet to hit paper on a new deal, Tom Brady made another Super Bowl appearance. Hulu played up his absence by hiring him to make a major announcement to football fans .