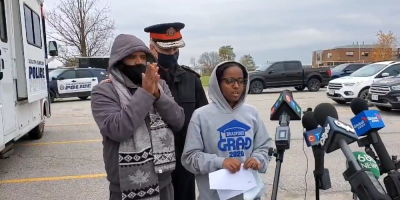 Fifteen-year-old Siem Zerezghi of Bradford has been missing for six days, with no signs of his whereabouts. Today, his sister Ruta was joined by her father Andmariam Hailemichael to plead for Siem to come home.

Siem was last seen at his home in Bradford, in the area of Professor Day Drive and Northgate Drive on Friday afternoon. His disappearance has led to a full scale search of Bradford and the surrounding area.

He is described as 5’11” with a thin build and short buzzed hair. He was last seen wearing black pants, black hooded windbreaker, and white and blue sandals.

UPDATED CLOTHING DESCRIPTION AND TIMELINE – #MISSING YOUTH: Police have obtained security camera footage that shows Siem Zerezghi was wearing these pants when he went missing. The video from his neighborhood also shows he left his home at 7:45 am on Sat. Oct.24, 2020. #FindSiem pic.twitter.com/xP0uZkDpQt

The South Simcoe Police Service has established a secure evidence portal with which area residents can upload anything they feel would be helpful in the search for Siem. That includes any security camera footage or images that may assist in locating the teen.