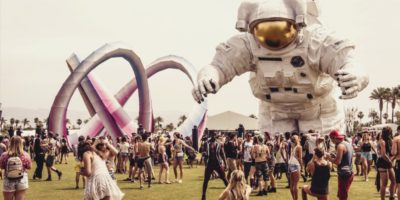 It’s now one of the most popular music festivals in the world, but in 1999 Coachella was just a brand new concept with an uncertain future. The California festival’s earliest years were met with rave reviews, but the promoters were failing to sell enough tickets to be profitable.

Coachella’s origins can be traced back to a 1993 feud between Pearl Jam and Ticketmaster, which began after the corporation had bought up its main competitor Ticketron. The band viewed Ticketmaster as establishing a monopoly on the concert industry, and in an effort to keep ticket prices to Pearl Jam shows affordable, the band sought to protest the move by boycotting all venues controlled by the corporation.

Pearl Jam chose to stage a concert on November 5, 1993, at the Empire Polo Club in Indio, California, where they could charge their own price and avoid working with Ticketmaster. The polo club had never before hosted a concert or an event of this scale, but the success of Pearl Jam’s concert established the site as a viable location for large-scale music events in the future.

Several years later, Goldenvoice, the concert promotion company who booked the polo club concert, was struggling to book shows against its larger competitors. After witnessing the success of the 1997 Glastonbury Festival, the company decided to take a chance on hosting a similar event in California. And in 1999, Goldenvoice announced the inaugural Coachella Valley Music and Arts Festival would take place that fall.

The festival faced many hurdles along the way to becoming the massive event it is today. Immediately after Coachella was announced, their insurance prices rose 40% as a result of the chaos and destruction which had just occurred at the infamous Woodstock ’99 concert. The first Coachella was headlined by Beck, the Chemical Brothers, Tool, Morrissey, and Rage Against the Machine, and was highly praised by fans, yet failed to sell enough tickets to turn a profit. In fact, Goldenvoice lost $850,000 on the venture.

Coachella did not return the following year, and in 2001 was unable to book enough acts for a two-day festival. Soon after, Goldenvoice was sold to Anschutz Entertainment Group, who wanted to continue trying to establish Coachella and had the capital to risk the almost guaranteed initial lack of profit. The 2001 version of Coachella still lost money, but the festival was gaining traction. In 2002, headlined by Bjork and Oasis, Coachella broke even for the first time.

In 2003, the option of overnight camping was added to the event, and Coachella started becoming a travel destination for music fans across the globe. Audiences grew over the next few years as huge artists like Red Hot Chili Peppers, Beastie Boys, Iggy Pop and The Stooges headlined. In 2004, the Pixies reunited to play Coachella, establishing a long-lasting tradition of the festival serving as host to the reunions of some of alternative music’s biggest acts.

By 2006, Coachella was grossing over $9 million, and the following year it was permanently extended to a three-day event. The next decade saw massive continual growth, and from 2013-15 Coachella repeatedly broke attendance and revenue records.

After a rocky start, Coachella is now one of the biggest music events in the world. A 2012 study showed that Coachella brought $254.4 million to the desert region, generating $1.4 in tax revenue for Indio. In 2017, the festival brought in 250,000 fans and grossed $114.6 million. Coachella, in addition to its cousin festival Stagecoach, is estimated to have a global impact of $704.75 million. The two events are estimated to have brought in $3.18 million in taxes in 2016.