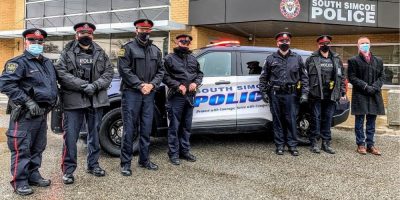 “You’ve been warned,” said Deputy Chief John Van Dyke at the kickoff event outside North Division in Innisfil, speaking directly to those who choose to drive impaired by alcohol, drugs or both.  “For the next seven weeks, a dedicated team of officers will be focused on catching impaired drivers. This team will be everywhere – on major roads, rural roads, side roads and if the lake freezes, they will be patrolling on the ice.”

The South Simcoe Police Service conducts RIDE checks year-round but there is increased enforcement levels during the annual festive campaign with the deployment of additional officers from several units.

The President of the Simcoe County Chapter of MADD Canada, Drew Sinclair, also spoke at the Festive RIDE launch. Sinclair noted impaired driving is easily avoided with today’s access to taxis, designated driving services and ride-sharing apps. The holiday season is a time for joy and celebration, he said, not grieving the loss of a loved one.

“There’s no reason for anyone to lose their life in an impaired driving crash.”