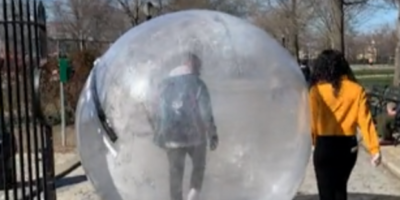 Turns out social distancing — staying at home, even locking yourself in your apartment — cannot prevent lovesickness. Take the case of 28-year-old Jeremy Cohen, the Brooklyn man who fell for a girl he saw out his window — dancing on her roof.

What did he see in her?  He could barely see her.

“I saw a shining bright light,” Jeremy said. “She was happiness in a dark time. So I went out to my deck and I waved hi.  She waved hi back. And I felt a little bit of a connection.”

But there’s nothing he could do about it. Unless you have a drone and the courage to fly your phone number to a total stranger. Tori Cignarella, 23, texted Jeremy shortly after.

I can’t believe this actually worked and yes this is a real story pic.twitter.com/X5KbBl0qIe

“So I asked her out to dinner,” Jeremy said.

Of course, Tori couldn’t come over so she sat at her table and he at his.

They even shared a FaceTime toast.

“It felt like a real date, even though we were on FaceTime,” Tori said.

“And the date lasted until Tori’s phone died,” Jeremy said.

For their second date, this week the couple went for a walk, using a giant bubble Jeremy bought on eBay.  Tori was bowled over by the gesture — almost literally.

Perhaps next Jeremy can fly his toothbrush over to her place.  I mean, why not? She’s already met his mother.

“Your mom reached out,” Tori said.

So are you guys dating now?

“Sure, but we’re open to seeing other roof people right now,” Jeremy said.

It is hard to maintain a long-distance relationship, even if it’s just across the street.  But we will certainly be rooting for them because it’s their kind of attitude and ingenuity that we’re gonna need to preserve our humanity.