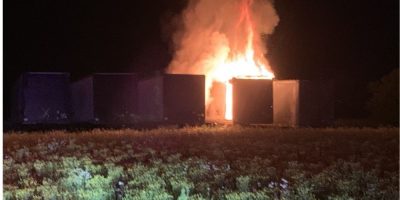 Three large commercial trailers were destroyed in an overnight fire at the Anne Street Airport in Springwater Township, in the area of Wilson Drive and Sunnidale Road.

Deputy Fire Chief Jeff French tells Barrie 360 the call was received just after 1 a.m. on Tuesday. It took 25 firefighters an hour-and-a-half to bring the flames under control, and to keep them from spreading to 16 other trailers. French also praised the Public Works Department for assisting with heavy machinery that was brought in to pull the trailers apart to douse hot spots.

The cause of the fire remains under investigation and is being deemed suspicious.

There were no injuries and damage is approximately $150,000.