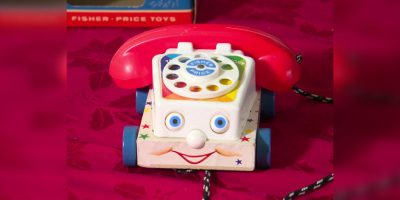 They are the touchstones of our youth: The Rock-a-Stack, the Xylophone, and those Little People.  No matter how old we are, everyone remembers their favorite childhood toys – like a toy that everybody knows, the Corn Popper.

Then there’s the lesser-known Bunny Scoot. It was introduced in 1931, part of the first batch of toys ever sold by Fisher-Price. They called them the “16 Hopefuls.”

Bruce Fox, who used to work for the company, has collected more than 500 Fisher-Price toys, and the stories to go with them. He showed correspondent Serena Altschul a toy elephant: “In 1933, this toy solved an international incident in Chile. They all were upset, and they were around a table. And the American ambassador pulled this toy out of his briefcase, and he put it on the table. And the toy started walkin’ back and forth, across the table, and everybody started laughing. And they all calmed down.”

This holiday season, cooped-up parents will spend an average of $150 on gifts for each of their kids. And Fisher-Price is a goldmine for many toy stores.

At The Toy Store in Sun Valley, Idaho, some of their bestsellers are licensed reproductions of Fisher-Price classics.

Altschul asked owner Carol Knight, “What do customers say when they see the Fisher-Price?”

“Well, they react and say, ‘Oh, my gosh, I remember when I had that toy as a child,'” Knight replied. “It’s very emotional. And there’s always a smile on their face.”

It all started in the small town of East Aurora, N.Y. in 1930. Businessman Herm Fisher joined forces with the city’s mayor, Irving Price, and his illustrator wife, Margaret, along with a toyshop owner named Helen Schelle. Together, they created a line of whimsical toys.

“They believed that toys were something that would make a difference in the world,” said Chuck Scothon, senior vice president of Fisher-Price.

During World War II, the company stopped making toys, and started making aircraft parts and shipping crates for supplies. “They really delivered the same premise of making great things; they just focused on supporting the war effort at that time versus focusing on toys.”

That ability to pivot served them well again this year. When the pandemic hit, the company released a line of “Thank You Heroes,” and donated the proceeds.

And with more parents working from home, Fisher-Price is keeping kids busy with toys that allow them to imitate Mom and Dad.

But it hasn’t been all fun and games. Last year Fisher-Price recalled millions of its Rock ‘n Play sleepers which were linked to accidental infant deaths.

But now, as the company marks 90 years, Scothon said they have staying power, because they’ve embraced their roots, like their legendary play lab.

“The play lab was inspired really by Herm Fisher’s vision that you needed to learn from children, not tell children what they wanted,” Scothon said. “That observing children would help you make better toys.”

Altschul said, “Everybody asks this: How long is the wait list to become a tester?”

“The list is not nearly as long as you’d think,” Scothon replied. “Particularly in 2020, we are now doing a lot of virtual toy testing.”

Zarni Htay and Jessica Zoladz, and their children, Cyrus and Anya, are among of the lucky ones.

As the kids tossled over a toy, Altschul asked, “Can you tell when a toy is, like, ‘Oh, they really nailed it here, this is a great one, it’s gonna be interesting for a long time’?”

“I think what you’re seeing right now is a good sign!” Zoladz laughed.

And that’s music to Domenic Gubitosi’s ears, because after all, he designed them – a dream job that’s been years in the making. “It really started at an early age. I probably played with toys longer than most kids,” he laughed.

Turns out, it was more than child’s play. Now at Fisher-Price, he oversees the way a toy looks, moves, and even sounds.

Inspiration can strike at any time: “The original Jumperoo, which was a great way inspired by people bungee-jumping. And we said, ‘How can we make babies bungee-jump?’ And so, we figured out a great way.”

Great innovation, mixed with a little nostalgia, is a formula that’s stood the test of time.

“Anything that’s part of your childhood and is part of positive memories is always something you hold dear to yourself,” Gubitosi said, “and it’s certainly something you want for your children and your grandchildren. So that everybody – Grandma and Grandpa, Mom and Dad, and the child – share in that Fisher-Price connection.”