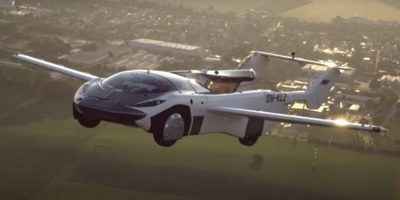 A prototype flying car has completed the first-ever test flight between airports in Slovakia, taking to the skies and landing in 35 minutes.

AirCar, described as a “dual-mode car-aircraft vehicle” in a news release, traveled from the international airport in Nitra to the airport in Bratislava on Monday.

According to the company that created it, Klein Vision, the flying car completed its 142nd successful landing and the flight marked a key development milestone. With a click of a button, the aircraft turned into a sports car in under three minutes – and it was driven by its inventor, professor Stefan Klein.

After exiting the AirCar following the test, Klein declared the flight has started a “new era of dual transportation vehicles.”

“It opens a new category of transportation and returns the freedom originally attributed to cars back to the individual,” Klein said. “AirCar is no longer just a proof of concept; flying at 8,200ft at a speed of 100 kt (115 miles per hour), it has turned science fiction into a reality.”

“The automated transition from road vehicle into an air vehicle and vice versa, deploying/retracting wings and tail is not only the result of pioneering enthusiasm, innovative spirit and courage; it is an outcome of excellent engineering and professional knowledge,” Sarh said.

The model, an AirCar Prototype 1, is equipped with a 160 horsepower BMW engine with a fixed propeller and a ballistic parachute. The AirCar has completed more than 40 hours of test flights, flown at 8,200 feet and reached a maximum cruising speed of 118 miles per hour, according to the company.

The milestone comes as hype continues to build for the flying car concept. Hyundai’s chief executive of European operations said on Tuesday that he believes flying cars will be a reality in cities throughout the world before the end of the decade. Earlier this month, the South Korean car manufacturer and General Motors said they’re pushing ahead with developing flying cars.