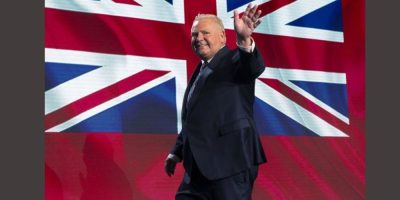 Ontario Premier Doug Ford announced his new, 30-person cabinet Friday, including former solicitor general Sylvia Jones as deputy premier and health minister, as well as a role for his nephew.

Many of the cabinet ministers remain in the same portfolios they held during Ford’s last government, such as Stephen Lecce in education, Peter Bethlenfalvy as minister of finance, and Caroline Mulroney in transportation.

here are some new faces in cabinet, including Ford’s nephew Michael Ford, who is named minister of citizenship and multiculturalism.

Michael Kerzner, a bioscience and technology entrepreneur elected in York Centre will be Solicitor General.

He replaces Lisa MacLeod in that portfolio, who is one of only a handful of people to be dropped from cabinet.

Merrilee Fullerton will stay in the children, community and social services portfolio, which includes navigating the autism file. A handful of people from the autism community stood on the lawn of the legislature just beyond the outdoor swearing-in ceremony to protest the growing wait list for services.

There are seven women in Ford’s cabinet, down from nine in his previous one.

Other new faces include Graydon Smith, the former mayor of Bracebridge, Ont., who will serve as minister of natural resources and forestry. The portfolio had been held by Greg Rickford, who stays as minister of northern development and Indigenous affairs.

He had also formerly held the mining portfolio, which has now been given to George Pirie. The former mayor of Timmins won the seat in that city after the NDP held it for 32 years. A news release says he has a specific mandate to develop the Ring of Fire.

Several other ministries have been tweaked, or have had mandates added. Prabmeet Sarkaria remains as Treasury Board president, but with an expanded mandate for emergency management and procurement. Kinga Surma stays on as minister of infrastructure, but with an additional mandate for government real estate.

Kaleed Rasheed is promoted from associate minister of digital government to the newly created portfolio of minister of public and business service delivery.

This report by The Canadian Press was first published June 24, 2022.