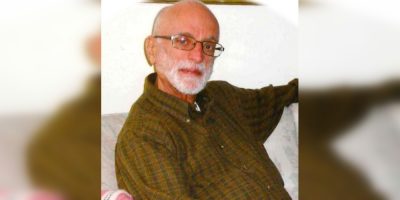 The man credited with co-creating an AIDS support network in Simcoe County has passed away.

George Edward Gilbert, Ed to those close to him, passed away on October 16, 2020, at age 76 following a battle with Parkinson’s Disease. He is being remembered as one of the co-founders of the AIDS Committee of Simcoe County (ACSC), which was later named the Gilbert Centre in his honour.

“He was my mentor 17 years ago,” Gerry Croteau, Executive Director of the Gilbert Centre, told Barrie 360. “He was the first gay, HIV-positive man to come out publicly in Simcoe, way back in the early 90’s.”

Croteau’s mentor began a fund in the 90’s while living in Collingwood, the Jericho Fund, to support others with HIV in the community. “Because in those days, you have to remember that anyone diagnosed with HIV lost employment, they could be kicked out of their apartments, because the fear of HIV was unknown in terms of how it was transmitted,” recalled Croteau.

Croteau said his friend Ed couldn’t stop there. “He had that passion within him, and he felt comfortable in his own skin. To be able to identify not just as a gay man, but as an HIV-positive man, that was something that was an amazing thing and it helped him start a grassroots operation here in Barrie,” Croteau said Gilbert lobbied the Ontario Government for funding and eventually received $45,000, leading to the creation of the ACSC. “What he started over 25 years ago is still going strong today, and much bigger and far more programming than he even imagined.”

“He received a Lifetime Achievement Award from the Ontario Seniors’ Association for his work within the HIV movement,” said Croteau, speaking of Gilbert’s legacy. In 2015, the ACSC changed its name to the Gilbert Centre, and continues to not only offer support for those living with HIV, but also provide a wide variety of programming to serve lesbian, gay, bisexual, or transgender individuals and their families in Simcoe and Muskoka.

A small service to remember Ed will be held on Thursday, October 22, but with COVID-19 restrictions in place, it is limited to friends only. Those who wish to honour Ed and his work are asked to make a donation to the Gilbert Centre in his memory, and sign his Book of Memories online.