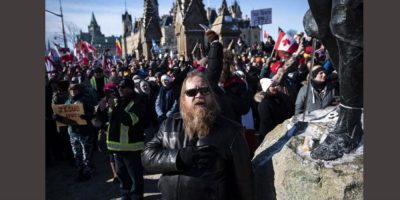 The co-founder of a Christian crowdfunding platform that organizers of a weeks-long protest in the national capital turned to for financing says he believes their efforts were largely “peaceful.”

Jacob Wells appeared at a parliamentary committee alongside his sister and co-founder, Heather Wilson, to be questioned by MPs about a campaign the site hosted that raised millions for protesters who blockaded access to Parliament Hill.

Protesters turned to the platform, which is based in the United States, after GoFundMe pulled the plug on an earlier campaign after it heard from local police the demonstration had turned into a crisis for the city.

Wells says judging by what he saw he believes the protest was largely peaceful, though it included some “fringe” elements.

He says the platform stands for “hope” and “freedom,” and doesn’t believe it’s right to paint the entire effort with a broad brush based on the actions of some.

Wilson told MPs she believes that had Prime Minister Justin Trudeau chosen to speak with the truckers who were protesting around Parliament Hill, much of what happened could have been avoided.

She also says had the federal Liberal government been concerned about the money being raised through GiveSendGo, it should have reached out.

The more than US$8.4 million raised through the site was frozen after the Ontario government went to court to petition it not to be distributed.

Earlier on Thursday, MPs also heard from GoFundMe president Juan Benitez, alongside a lawyer for the company, who defended how the crowdfunding platform handled the initial campaign.

MPs questioned Benitez on how the platform responded to a fundraiser organized by Tamara Lich, who has since been arrested for her involvement in the protest.

Benitez testified GoFundMe began monitoring the campaign in mid-January after it became popular and initially determined that it fell within its terms and conditions of service.

The committee heard that on Jan. 27, nearly two weeks after the fundraiser began, the site released $1 million to the organizer.

Kim Wilford, counsel for GoFundMe, said at the time there was nothing to signal there were issues with the organizer. The money was provided with information on how the funds would be dispersed, including how leftover cash would be sent to registered charities, she said.

After the money was released, Benitez told MPs the situation took a turn.

“Things immediately and very rapidly changed,” he said. “Communication changed, information on the facts changed, the convoy itself changed and we responded to those changes.”

He took MPs through a timeline of how by Feb. 4, after consulting with local police, GoFundMe decided to pull the campaign, which at that point had topped $10 million, and began offering refunds to donors.

Wilford said GoFundMe is proud of how it handled the situation.

The committee heard that more than 85 per cent of the campaign’s donations came from Canada.

The federal government did not directly contact GoFundMe about any concerns with the fundraiser, said Benitez.

“The freedom convoy fundraiser was unique,” he said. “We support peaceful protest, provided they are within our terms of service.”

He said while there are lessons to be learned from the experience, he hopes MPs recognize the action taken by GoFundMe.

This report by The Canadian Press was first published March 3, 2022.