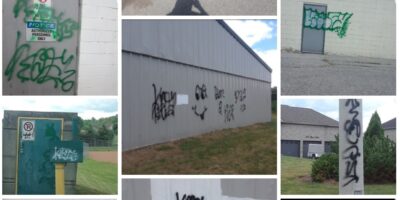 Artwork to some. A crime to the OPP.

A witness called Nottawasaga OPP around 10 p.m. on July 30 to report seeing two suspects arrive in a vehicle at the Thornton Community Centre parking lot, near the outdoor hockey rink. The witness said the suspects spray painted the side of the arena and fled in a small white car.

Essa Township officials covered up the graffiti, and the same areas of the outdoor hockey rink were tagged again the following night.

Police said while this type of property crime might be seen as minor, mischief is a costly criminal offence for the Township, that ties up police resources and negatively impacts the community as a whole.

The crime carries a maximum of 10-years in prison upon conviction, if the property that has been damaged has a value in excess of $5,000.