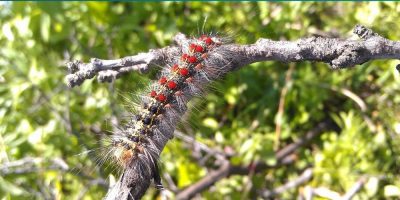 In summer 2021, gypsy moth caterpillars took over our outdoor spaces. Everywhere you turned you would find dozens, if not hundreds, of them. As we head into spring, many people wonder if they’ll be back in the same numbers again this year.

So, we talked to Simcoe Forestry to find out what the 2022 forecast looks like. We also found out what the city of Barrie is doing about them and how you can help.

But before we get to that, let’s get to know this invasive species a bit better …

First you should know that gypsy moth caterpillars are now called spongy moths in an effort to use inclusive language. This is how we’ll refer to them for the rest of this article. Their scientific name is Lymantria dispar dispar (LDD), which is what most government agencies call them.

Spongy moths are an invasive species from Europe. They came to Massachusetts in 1860 but didn’t spread to Ontario until 1969.

Spongy moth caterpillars aren’t just annoying to deal with, they can also wreak havoc on our green spaces. This is because they greedily feed on leaves. The caterpillars either chew holes in the leaves or eat the whole thing.

When there’s a major infestation, this can cause a widespread loss of leaves (called defoliation). Healthy trees can withstand a few years of defoliation. But other trees will stop growing leaves. This makes them more susceptible to drought, other pests and poor growing conditions.

While less common, they’ll also target evergreens like the eastern white pine, Colorado blue spruce and fir. This is especially problematic, as evergreens can die after a year of defoliation.

The good news is, the population of spongy moths is cyclical. Infestations occur every 7 to 10 years and then crash after 3 to 5 years.

While they fall prey to birds, mammals and certain wasps, their collapse is usually the result of a host specific virus and fungus. (The Nucleopolyhedrosis virus (NPV) and Entomophaga maimaiga fungus).

At the end of summer, spongy moths will lay egg masses. Over winter, the County of Simcoe surveys the masses to forecast each year’s expected population. In 2020 the County surveyed 37 forests. In 2021, they expanded their sample to 84 forests across Simcoe. They collected the following results:

We spoke to Graeme Davis, a County Forester for the County of Simcoe. He shared more about what these results mean for the community.

RELATED: Last year, the city looked at options to fight against the Gypsy Moth takeover …

“While there will be local and regional differences, based on the work that we did with surveys around the County, there are indications that numbers are on the decline. During the surveys, viral infection and predation of egg masses were also evident, which will ultimately result in collapse [of the spongy caterpillars].”

This is good news as it means nature is taking its course and we’ll hopefully be past this infestation soon. The bad news is, we can expect the spongy caterpillars to be back in 2022.

So what is the city doing to try and prevent the impact of the spongy moth caterpillars?

What Is Barrie Doing About The Spongy Moths

Barrie has implemented an integrated management approach for dealing with the spongy moths. Under the LDD Moth Management Approach staff will apply one of four measures:

According to Graeme, “There are misunderstandings about what [aerial spray] programs can do. It can effectively keep numbers down, if done properly, but it will only control populations for that year in the areas it was sprayed. Ariel spray won’t impact the long-term outcome.”

The County of Simcoe will not be using aerial spray to treat county forest properties.

If you’re worried about spongy moth caterpillars on your property there are some things you can do.

How You Can Help Get Rid Of Spongy Moth Caterpillars

Homeowners can take steps to reduce the number of Spongy Caterpillars on their own properties, but Graeme explains “it will take a lot of time and work to see results.”

It’s also important to remember these efforts will only impact your own property and trees.

“Any measures taken to reduce caterpillar numbers will not have an impact on the long-term outcome. Decline of the infestation is predominantly caused by the [nucleopolyhedrosis] virus,” Graeme continued.

If you want to take steps to reduce numbers, here’s what you can do.

If you want to try and reduce numbers in your space, Graeme explained that “removing egg masses is the biggest step homeowners can take. This can be time consuming because masses are hard to find, but there’s still time before they hatch to make an impact.”

Egg masses are approximately 4 cm long, tan colored and contain 100 to 1000 eggs. You’ll usually find them on tree trunks, furniture, and buildings between August and April.

To remove them you will want to use a plastic scraper or bread knife to scrape away the masses. Be sure to wear gloves and eye protection. Once removed, place the contents of the egg masses into a bucket of soapy water and soak for 2 days. You can also burn the egg masses.

Spongy moth eggs hatch in April and May. The caterpillars are charcoal gray with 5 pairs of blue dots and 6 pairs of bright red dots. Over summer, they’ll grow to be 5-6 cm long. When the caterpillars hatch, they fall to the ground then look for trees to climb so that they can feed on the leaves.

To prevent them from reaching the canopy, you can tape the tree. To do this, wrap two layers of duct tape around your trees. Twist the tape so the sticky side faces out then wrap it around the tree several times. This will create a wide sticky band the caterpillars won’t be able to cross. You will want the tape to be approximately 5 feet from the ground. Once the tape loses its stick, remove and reapply.

You can leave the tape on until August, but as the caterpillars grow, you may want to consider the next method.

3. Install Burlap Skirts (May to June)

Burlap skirts help collect adult caterpillars. That’s because larger caterpillars move down the tree during the day for shelter. At night they move back into the canopy to feed. Tying burlap around the tree gives the spongy caterpillars somewhere to stay sheltered. Once settled, you can easily collect and destroy them.

This is how it works:

Graeme recommends skipping the tape and using burlap whenever possible. He explains that “burlap skirts are better than the tape method as tape can potentially harm the tree and other insects and creatures who come across it.”

RELATED: The City of Barrie is offering free burlap kits to help combat the spongy moth …

Earlier in the article, we mentioned the City of Barrie uses TreeAzin for high risk trees. This is an insecticide that was originally used for the Emerald Ash Borer, another invasive species. But it turns out it’s also effective for Spongy Moth Caterpillars.

The best time to inject your trees is between early May and early June. Once injected, it will protect your tree for the whole season. If the caterpillars are still around the following year, you’ll have to reinject the trees.

A licensed exterminator or permit holder must make the injection. Certified farmers can also do injections themselves.

The injection price is based on the diameter of your tree at chest height. The cost/cm will depend on the service provider but is usually around $6. While this can add up, the injection usually costs less than removing a tree destroyed by defoliation. That’s why it’s used for high risk trees, like coniferous trees and trees in bad health.

Using the injection doesn’t guarantee survival but should increase your tree’s chances. It’s important to do your research or talk to a professional to determine whether it’s a good option for your trees.

5. Leave Dead Caterpillars Where They Are (All Season)

While it can be instinctive to remove dead caterpillars, you should leave them. Dead caterpillars are a sign of natural decline and can help spread disease.

RELATED: Gypsy Moths may be taking over for now, but a virus might soon wipe them out …

Spongy caterpillars will start to cocoon in July for 10 to 13 days. When you find a cocoon (pupae), collect it and put it in soapy water for a few days. Again, you should always wear gloves.

There’s not much that you can do once a caterpillar turns into a moth. The good news is this stage of their life cycle is short lived and the moths do not eat leaves.

Females moths are white with dark zig zag markings and can’t fly. Their wing span is  about 5 cm. Males are smaller with a wing span of 2.5 cm. They are brown and fly around to the females.

8. Take Care Of Your Trees (Year Round)

Your tree’s best chance for survival during an infestation is to stay healthy. Do what you can to help your trees prosper. This includes watering them during dry spells and protecting the root zone. You can also put mulch at the base of the tree to insulate roots, protect from mowers and prevent dry soil.

The decision to intervene will depend on your personal comfort and the health of your trees. Most of the time, you should let nature take its course. That can sound counterintuitive but sometimes it’s better to let the populations decline naturally. This is because intervention can prolong the infestation. And while defoliation looks awful, healthy trees can survive a couple of years of defoliation.

That being said, if your tree is already in distress, dieback or mortality are more likely. Coniferous trees are also at higher risk because they may die after 1 year of defoliation. In these situations, you may want to take action to help keep your trees alive.