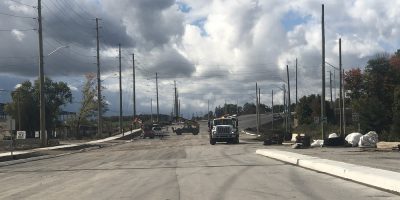 For the past ten months, work has continued to connect Harvie Road to Big Bay Point via a crossing over the 400. All roadwork on the east side of the bridge, including Big Bay Point, Bayview Dr. and Fairview road, is expected to be completed by late October. All roadwork west of the Harvie Rd. reservoir is in the final leg as well, and Harvie Road should reopen by the end of the month.

While the east side of the bridge is expected to be completed by the end of October, further efforts are required on the west side; the project contractor has decided to shut down operations at the end of October and through the winter months. While working through November and December is possible, there are tasks that cannot be completed in low temperatures or under wet conditions. Work will resume in the spring of 2021. It was initially expected the project would be complete by November.

When completed, the bridge connecting Harvie Road to Big Bay Point Road will have five lanes for vehicular traffic, two for bikes, and two sidewalks.