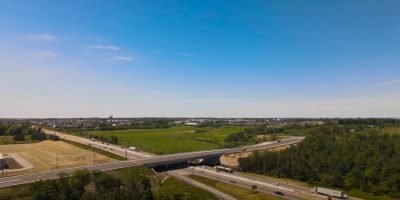 It’s been hard to get excited about much over the past year-and-a-half, but Barrie Mayor Jeff Lehman says he’s “very excited” that the bridge from Big Bay Point Road, over Highway 400, to Harvie Road is on the verge of opening.

“The virtual official opening event is on Monday, June 28 at 11 a.m. Now, that does not mean that’s when traffic will start going over. It might be sooner than that … sometime between now and then.”

The bridge, designed to relieve some congestion on Mapleview Drive, was supposed to open last fall, but was delayed by weather and site issues.

“This is the key link we need in the south end to try and alleviate the traffic that has become legendarily bad on Mapleview around the 400. So between Mapleview and Essa, there’s no way to get across Highway 400 except through the interchanges,” said Lehman, “everywhere else in the city. there’s other bridges, but not in that area.”

In addition, an intersection has been built at the west end of the bridge in anticipation of Bryne Drive being connected between the Harley-Davidson dealership in the south to the Leon’s store to the north. Work on this project is expected to begin next year and be completed in 2023.