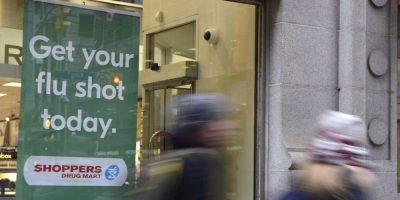 Canada has entered a flu epidemic, the national public health agency said Tuesday, as some experts warned the surge of respiratory illnesses in the country will worsen.

The Public Health Agency of Canada said in its FluWatch report that the rate nearly doubled in one week, to 11.7 per cent between Oct. 30 and Nov. 5, compared to 6.3 per cent the week before.

The agency declared an epidemic, which happens most years after the threshold of a five per cent positivity rate is surpassed, though it said influenza levels are higher than would have been expected when compared to pre-pandemic years.

The agency said there were 13 confirmed influenza outbreaks in the first week of the month, including nine in long-term care homes and one in a school or daycare.

The surge in flu cases comes as Canada’s health-care system grapples with a triple threat of respiratory viruses — COVID-19, influenza and respiratory syncytial virus. Already, pediatrics hospitals in Ontario are overwhelmed by a surge in patients with respiratory illnesses, leading to the cancellation of some non-urgent surgeries.

Dr. Alan Drummond, an Ontario emergency physician, described the current spike in flu cases as the “calm before the storm,” saying the worst is yet to come.

“I don’t have a crystal ball, but my gut sense is that we may be in serious trouble, if we end up with both concurrent COVID and resurgent influenza … with a vulnerable hospital population,” he said in an interview.

“We are clearly talking about a tridemic of influenza, COVID and RSV,” he said. “It is not going to be good.”

Drummond said measures put in place previously for COVID-19, such as masking and social distancing, decreased flu cases significantly the past two years, and could stem the current surge along with the public getting vaccinated against the flu and COVID-19.

“Those two strategies alone, will help a great deal in terms of preventing some of kind of conflagration of infectious diseases,” he said.

Ontario’s chief medical officer of health strongly recommended Monday that residents wear masks in all indoor public settings, while Quebec’s college of physicians urged people to wear masks in public as respiratory viruses there are also filling up emergency rooms.

Alberta Premier Danielle Smith has said she will not impose a mask mandate and Saskatchewan’s chief medical health officer said Tuesday he is not recommending masks.

The McMaster Children’s Hospital in Hamilton said Tuesday its pediatric in-patient unit is operating at between 130 and 140 per cent capacity and seeing a daily average of nearly 200 patients per day at its emergency department.

“There’s a lot of time left in what is traditionally the children’s viral season,” said Squires. “We really have no choice but to plan for the possibility that this will continue and, in fact, get worse.

Dr. Angelo Mikrogianakis, chief of pediatrics at the hospital, recommended the public and children get the flu shot along with masking to prevent children from getting sick and overwhelming capacity in the care system.

Mikrogianakis said pediatrics goes through a respiratory illness surge that overwhelms hospitals every winter, but noted the current situation is significantly worse.

“My simplest way of describing this is: we are seeing three winter surges combined into one and we’ve started earlier than we usually do,” he said, adding that the winter surge typically starts in December but this year began in October.

“It’s going to be longer and likely require more supports from our hospital systems, and challenge our responsiveness and our supports for sick children more than we’ve probably ever seen in my career.”

Dr. Timothy Sly, an epidemiology professor at Toronto Metropolitan University, said the flu season started earlier than usual and cases have surged sharply because natural immunity against common cold viruses — such as rhinovirus, parainfluenza virus and RSV — has dropped due to COVID-19 restrictions being in place the last two winters.

“This is because the masks have worked. We have been protecting against COVID and (that) has managed to make us more vulnerable now to these seasonal viruses,” he said in an email.

Sly said if hospitals continue to remain overcrowded with patients, it will lead to further cancellations of surgeries and delays in diagnosis of other health conditions such as cancer and heart diseases.

“We need to slow the spread of all respiratory conditions” to decrease pressure on hospitals, he said.

– With files from Tyler Griffin